Extra horse gives equestrian leg up
Sue Blinks is doubling her chances of returning to the Olympics in dressage this year, from The Union-Tribune. Read more >>

Horse Burial Not Good Enough For Animal Control
The horse got buried, but its hooves were sticking from the ground, from TBO.com Read more >>

More charges have been filed against a man accused of neglecting several horses on a farm in northeast Iowa
More charges filed in horse neglect case, from WOI-TV. Read more >> 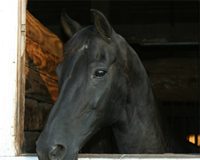