Starving horse video creates controversy
A video on YouTube.com followed by anonymous telephone calls to media throughout North Texas created a buzz among horse owners and lovers, from the Herald Democrat. Read more >>

Horse patrol starting at airport
Anna Zinkhon will get to take her horse where it hasn’t been before, from the Lexington Herald-Leader. Read more >>

Horse gives rare birth to twin foals
Something miraculous happened in Frank and Nancy Preston’s horse barn as the minutes ticked down this year to Easter Sunday, from Quad-City Times. Read more >>

North Dakota Horse Council
Horse Lovers were in the Capital City to talk about what else… horses, from KQCD. Read more >> 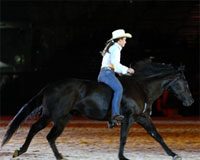 In Memoriam: Horses and Riders Lost in 2012