Owner May Face Charges After Car Hits Horse
The driver of a car that struck a horse loose on county Road 220 in Florida Tuesday morning was not injured, but the horse had to be put down and its owner is facing charges, from News4Jax. Read more >>

Two juveniles arrested after spooking horse with fireworks
Suffolk, Va., police have filed animal cruelty charges against a 17-year-old girl and her 14-year-old brother for using fireworks to intentionally frighten a horse, from WAVY. Read more >>

Horse’s tough life eases in retirement as humans fight
The knowns in this pony’s life are so fragmented that they might as well be a chain of islands in a distant sea. But the knowns are bad enough. They go something like this, from the Palm Beach Post.  Read more >>

Construction begins on 8,000-square foot museum expansion
The Kentucky Horse Park’s International Museum of the Horse Launches Exhibition Space to Honor the Horse of the Near East, from the KHP. Read more >>

The spirit of sport when it comes to welfare and fair play
Update on the Medication Control Programme figures for 2007, from the FEI.  Read more >>

First class educational programme for endurance
The discipline of endurance is undergoing a full review of its rules, from the FEI. Read more >> 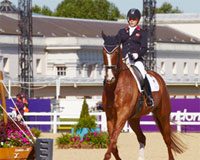