John Ward Rides Smart Little Pepinic to the 2008 NRCHA Hackamore Classic Open Bridle Spectacular Championship
Along with being one of the National Reined Cow Horse Association’s major events, the NRCHA Hackamore Classic, held April 25-27 in Paso Robles, California, also boasts a full slate of NRCHA approved classes – the highlight of which are the Open and Non Pro Bridle Spectaculars, from the NRCHA. Read more >>

Sandy Collier and Tazs Precious Peppy Win 2008 NRCHA Hackamore Classic
She is a former National Reined Cow Horse Association Snaffle Bit Futurity Open Champion and is consistently a major contender at all levels of reined cow horse events, but there’s been something missing from Sandy Collier’s show resume for the last few years – a championship at an NRCHA major event, from the NRCHA. Read more >>

Rolex: Statement from Laine Ashker’s Family – April 28, 1p.m.
Laine’s condition is improved as of this afternoon although she is still listed as critical, from the USEF. Read more >>

Billy Twomey out of hospital after horrific fall leads to death of Pikap
Cheshire-based Irish show jumper Billy Twomey has returned home after suffering a horrific fall at Grobbendonk CSI*** in Belgium on 25 April, which resulted in his promising ride Pikap being destroyed, from Horse and Hound. Read more >>

Horse Attack Under Investigation
The Levy County Sheriff’s Office is investigating a horse attack at a equine rescue center near Ocala, Fla., from My Fox Orlando. Read more >>

Torrance Co. deputies rescue baby horse
A horse that was found near death on a front porch of a Torrance County, N.M., home over the weekend is now recovering at a horse rescue ranch, from KOB. Read more >> 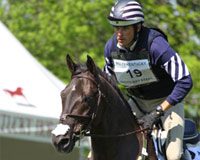