Racing in the News

Big Brown to run in Preakness horse race
Undefeated Kentucky Derby winner Big Brown will have no rival horses from his Triple Crown triumph when he races in Saturday’s 133rd Preakness – a situation that hasn’t happened in 60 years, from Yahoo. Read more >>

Changes in horse racing landscape cause more breakdowns
In one respect, less has become more during the 30 years since Affirmed became the last of racing’s 11 Triple Crown winners, with Alydar battling him every step of the way, from The Chicago Tribune. Read more >>

Breeding, betting and dirt at issue in horse racing reform
The public’s revulsion over the high-profile breakdowns within thoroughbred racing has reached a crisis point that demands a strong and determined response from the industry, according to prominent horsemen, including breeders, trainers and jockeys, from USA Today. Read more >>

Runaway Germantown Horse Recovering – And Pregnant
The horse that took off through the streets of Philadelphia’s Germantown and Mount Airy Saturday afternoon and was hit by a car (see previous story) is said to be recovering well, from KYW 1060.  Read more >> 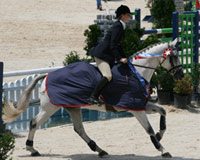