Africa: 300 horse deaths huge loss to industry
Billed as the worst outbreak of African Horse Sickness (AHS) in the Grahamstown area in 20 years, the deaths of almost 300 horses in four months has cost the equine industry millions of rands, from the Daily Dispatch Online. Read more >>

Injured Rolex rider ready to get out of hospital, on a horse
The young woman seriously injured at the Rolex Three-Day Event in April will be back on a horse in three weeks, her mother said Tuesday, from the Lexington Herald-Leader. Read more >>

USDF Launches Multi-Lingual Feature of New Web Site
The United States Dressage Federation (USDF) launched a multi-lingual translating feature, located on the bottom of every page, on its website, from the USDF.  Read more >>

USEA Steps Up Fundraising Efforts for Equine Research Health Study
Following the launch of its Equine Research Task Force at the end of March, the USEA is increasing its efforts to secure funding for studies into equine pulmonary hemorrhage and other sudden cardiovascular events, from the USEA. Read more >>

APHA and Benbrook Stables
More than 130 equestrians rode for a cause May 3, when they joined the American Paint Horse Association and Benbrook Stables for their second annual “Saddle Up! for St. Jude” benefit trail ride and auction in Benbrook, Texas, from the APHA. Read more >>

Horse Racing: Derby also-ran Gayego joins Preakness field
Saturday’s Preakness, the second event in US horse racing’s Triple Crown, will not be the first in 60 years to feature only one horse from the Kentucky Derby after Gayego was entered on Tuesday, from Yahoo. Read more >>

Lawyers horse owners accused of defrauding clients of millions go on trial in Kentucky
Two part owners of last year’s Preakness winner went on trial Tuesday on charges they defrauded clients out of millions in a case being watched closely by the thoroughbred industry because the men could lose their share of the horse, from the Star Tribune. Read more >>

Durability vs. speed in horse breeding
Big Brown figures to produce big green as a stallion, which is why the Kentucky Derby winner most likely will retire young, just as his parents did, from the Lexington Herald-Leader. Read more >>

Horse abandoned, covered in used motor oil
The patches of missing hair don’t even begin to tell the story of what this horse has been through, from WSLS. Read more >> 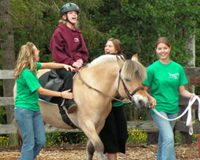