Big Brown rolls in Preakness — Crown’s in sight
Favorite pulls away down stretch to win by 5 1/4 lengths; Belmont is June 7, from NBC. Read more >>

Vt. community rallies to help injured horse
Kyrie never knew she had so many friends, from the Boston Globe. Read more >>

SmartPak Continues Commitment in the Fight against Breast Cancer
With donations exceeding $50,000, SmartPak Teams up for Avon Walk for breast cancer, from AHP. Read more >> 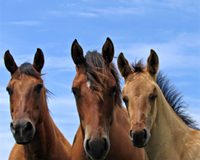