Ward makes impression at Devon Horse Show
McLain Ward has been the Devon Horse Show leading open jumper rider five times in the last 10 years. But for the last three years, Laura Chapot has taken that honor, from The Philadelphia Inquirer. Read more >>

Value and number of 2-year-olds drop in latest horse auction
Fasig-Tipton Midlantic, which operates one of the top-grossing horse auctions in Maryland, has reported sharp declines this year in every category from overall sales to the number of horses sold, according to the latest auction results released by the Kentucky-based company, from The Maryland Daily Record. Read more >>

Rise of the Quarter horse
In a pasture in eastern Henderson County, Ky., populated by a couple of dozen mares and their babies, a young foal is laying on its side, basking in the sun, from the Evansville Courier & Press. Read more >>

Around the Country and the World

Horse spooked by soda can drags Haltom City, Texas, girl to death
A 9-year-old Fort Worth-area girl has died after a horse threw her and dragged her for about 1½ miles over the weekend, from the Houston Chronicle. Read more >>

A stable environment on river dumping ground
For years, this Logan Township site in Pennsylvania, at the mouth of Raccoon Creek, was a dumping ground for mud and silt dredged from the Delaware River, from The Philadelphia Inquirer.  Read more >> 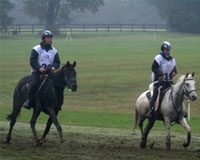