All Fit and Rearing To Go
All 57 horses presented at the final veterinary inspection for Eventing were passed fit to compete by the Ground Jury, although there were some anxious moments for both America’s Gina Miles and Australia’s Sonja Johnson, from the FEI.  Read more >>

Keymaster Is Recovering; Disappointment for Clemintino, Flarup and Carlerback
Horse-injury problems have cut short the Olympic ambitions of Brazilian Dressage competitor Rogerio Clementino, and event riders Peter Flarup from Denmark and Viktoria Carlerback of Sweden, from the FEI.  Read more >>

Horse attack heads to court
A pair of Georgia parents are suing the Maroon Bells Lodge and Outfitters at the T-Lazy-7 Ranch for damages sustained when a horse bit their daughter’s face in August 2006, from the Aspen Daily News.  Read more >>

Texan Gets Probation over Dragging Death of Horse
A Jefferson County, Texas, man faces probation over the 2005 death of his horse after the animal was dragged behind his pickup, from MyFox Dallas/Ft. Worth.  Read more >>

Second Orange Co. Horse has Encephalitis
Florida’s Orange County Health Department (OCHD) has received notification that a second horse in Orange County has tested positive for Eastern Equine Encephalitis (EEE). EEE is transmitted to animals and humans through the bite of an infected mosquito, from My Fox Orlando.  Read more >>

Expo in Hawaii will shed light on horse abuse
The brown and white painter horse had been abandoned in a Hawi field for more than a year when the Humane Society got a call this summer, from the AP.  Read more >> 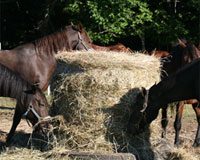