U.S. wins gold after jump-off
The U.S. has won the gold medal Monday in Olympic equestrian team jumping, knocking out Canada, which has taken silver, from NBC.  Read more >>

US Dressage Riders Return in Grand Prix Special; Peters and Ravel sit Fourth, King-Dye and Mythilus Eighth, Heading into Freestyle at 2008 Olympic Games
The dressage riders temporarily reclaimed the ring from the show jumpers tonight at Sha Tin and although Germany continued to rule… the Americans put in an impressive showing, from the USEF.  Read more >>

Olympic Eventing Rider Amy Tryon Hospitalized in Hong Kong
Eventing rider Amy Tryon has been in the Prince of Wales Hospital in Hong Kong recovering from cellulitis in her leg. The infection occurred after her fall from Poggio II on the cross country course at the 2008 Olympic Games, from the USEF.  Read more >>

Morgan Moog Tops Competition to Win the 2008 USEF Pony Medal
Though it was Morgan Moog’s first time competing at the 2008 United States Equestrian Federation (USEF) Pony Medal, she and her horse Goodnight Moon topped the efforts of 184 other competitors to win the championship title, from the USEF.  Read more >>

Horse Diagnosed with Disease
The state says a horse in southwest Florida has been diagnosed with a disease thought to be eradicated in the United States, from WCTV.  Read more >>

Jockey Club calls for upgraded lab system for horse testing
To further clean up Thoroughbred racing’s act and image, a key panel has recommended that states and racetracks move toward a top-level system of labs for equine drug testing, from the Lexington Herald-Leader.  Read more >>

Quest for speed is challenged
Arthur Hancock, the owner of Stone Farm in Paris, Ky., has horse-breeding roots in the bluegrass that go back three generations, from the Courier-Journal.  Read more >>

Genetics may hold key to injury-prone horses
With enough money, a test for many genetic causes for unsoundness might be developed soon, from the Courier-Journal.  Read more >>

Horse milk makes debut at agriculture show
It all started with a request from a sick relative who wanted to try horse milk, from NSTOnline.  Read more >> 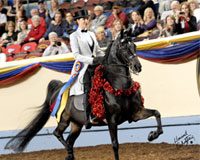