Budget woes threaten wild horse herds
A herd of 19 mud-splattered wild horses and burros found a new home this month at an adoption in Show Low, Ariz., from the Chicago Sun-Times.  Read more >>

1 horse euthanized, 2 recovering after dramatic rescue
One of three horses found stuck in ditches and wandering the streets of a rural area of Southwest Miami-Dade, Fla., had to be put down, while the other two continue their recovery, from WSVN.  Read more >>

Family Searches For Stolen Horse
Max may look like just a horse, but to this family of three, he’s a fourth member, from MyWabashValley.com.  Read more >>

Dressage at Devon Presents a Forum with Dr. Hilary Clayton on Fitness Training to Maximize Dressage Performance
Hilary M. Clayton, BVMS, PhD, MRCVS, will be the speaker at the Dressage at Devon Forum on Wednesday, September 24, from the USEF.  Read more >> 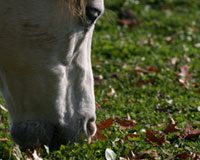 How to Revitalize Drought-Stricken Pastures