Horses Affected by Hurricane Ike: Health warning on Salt Poisoning/ Water Deprivation
Any species may be affected. High salt itself can kill, but the problem is more often sudden access to unlimited water after a period of deprivation or ingestion of high-salt water, from the TAHC.  Read more >>

Horse training-injury reporting sought
The Kentucky Horse Racing Commission’s new equine medical director is calling for mandatory reporting of horse injuries during morning training at the state’s tracks — something industry officials have lacked data on for years, from the Courier-Journal.  Read more >>

Thieves Target Horse Tails in NW Iowa
Some horse thieves are at work in Buena Vista County, Iowa, but they’re only after the tail, from KCRG.  Read more >>

Horse Lovers Take to the Trail for One Missing Link
Ozarks horse lovers will be heading toward Hulston Mill in Dade County, Mo., this weekend to help out with a good cause: raising money to find missing children.  Read more >>

Beijing to hold equestrian and horse industry fair
Though China has a history of horse racing thousands of years old the last 30 years of economic development have led to an increased interest in equestrian sports and horse riding, from People’s Daily Online.  Read more >>

Big Chex To Cash Enters the Breyer Stable
Reining champion Big Chex To Cash is set to join the Breyer stable for 2009 as the most recent reining addition to Breyer’s product line-up since Colonel’s Smoking Gun was honored in 2002, from AHP.  Read more >> 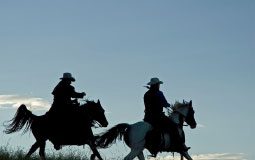