Zara ‘Devastated’ After Horse Fall
Zara Phillips is said to be “devastated” after her horse was put down following a fall during a showjumping competition – in which the Royal suffered a broken collarbone, from Yahoo.   Read more >>

Mixed reaction to plan for Irish sport horse breeding
Horse Sport Ireland (HSI) is inviting comments on its draft strategic plan to develop equestrian sport in the Republic over the next four years, from Horse and Hound.  Read more >>

FOSH Provides Funding to Nationally Distribute Anti-Soring DVD
FOSH announced that it has funded the national distribution of the award winning, anti-soring video, See It Through My Eyes. See It Through My Eyes won its creators the coveted Gold Award from the Girl Scouts of America, from FOSH.  Read more >>

Search on for horse that may have suffered abuse; owner arrested
Missing: An emaciated black horse owned by a Tipton County, Tenn., man charged with animal cruelty. “We’re in desperate need to find this baby,” said Kim McMullen, receptionist and technician at Northgate Animal Hospital in Memphis, from the Commercial Appeal.  Read more >>

Zenyatta makes case for Horse of the Year honors
The Breeders’ Cup produced upsets, exciting finishes and most importantly to the image-battered horse racing industry, an incident-free two days of action, from Fox Sports.  Read more >> 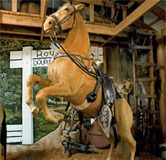