Whipless race makes history at Plainridge
History was made on October 27, 2008 in the first race at the Plainridge Racecourse in Plainville, Massachusetts, because for the very first time in a parimutuel race in Massachusetts, a race was designated a whipless race which meant no drivers were to carry whips whatsoever and the results were astounding, from HarnessLink.  Read more >>

Humane Society offers reward for info about dead horse
The Humane Society is offering a reward of up to $2,500 for information on a horse that was shot and killed in Jefferson County, Tenn., from WBIR.  Read more >> 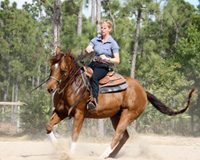