Home Horse News Horses still affected by wildfires
On Thursday, as Red Flag warnings were lifted in Southern California and President Bush arrives in the region to announce that wildfire victims can apply for FEMA aid, area horse owners continue to focus on keeping their animals safe.

Equines affected by the Santiago fire burning in Orange County are not expected to return home today. The fire, which has consumed more than 22,000 acres, continues to burn and has affected several public boarding facilities. The fate of these stables is still unknown, but rescuers believe most horses were safely evacuated from the area, and there are no reports of equine loss yet. There are some incidental reports of people not evacuating their horses but instead turning them loose, however none of the reports can be confirmed.

Winds in Orange County calmed on Thursday and the relative humidity is higher. Even though Mother Nature is cooperating, firefighters lost ground on the Santiago fire overnight as flames spread eastward into the fuel-rich Cleveland National Forest. Firefighters will be keeping a watchful eye on nearby outlying communities, some of which have very high horse populations.
For the thousands of horses affected by fire in San Diego, some are being allowed to return home. The area’s equine hospitals, which were forced to evacuate, are expected to reopen some time today.

But the news is not all good. San Diego, which has suffered the most damage during the fires, is still burning out of control in many areas. Additionally, new areas are being evacuated as the fires cut uncharted paths. On Thursday, the Harris fire began burning toward the northeast, affecting the rural community of Jamul, which prides itself on beautiful equestrian trails. Early Thursday morning the County Air Pollution Control District in San Diego warned that air quality in the cities of Chula Vista, Del Mar, Downtown San Diego, El Cajon, Escondido, Otay Mesa, Kearny Mesa and Oceanside is unhealthful. Del Mar alone is currently housing 2,000 horses at its Fairgrounds, and 1,000 horses at the Del Mar Horse Park; El Cajon is housing hundreds of evacuated horses in shelters across the city. Escondido and Otay Mesa are both equestrian communities as well. 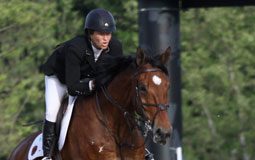