All profits from the DVD will be donated to Old Friends Thoroughbred retirement facility based in Lexington, Ky., and earmarked for the John Henry Memorial at the Hall of Champions in the Kentucky Horse Park.

In addition to the memorial service coverage and career highlights, the DVD features interviews with trainer Ron McAnally, Lewis Cenicola and Cathy Roby, who cared for John Henry during most of his life at the Hall of Champions barn.

For the news story on John Henry’s passing, click here >>

Share your memories and condolences at the John Henry Memorial page >> 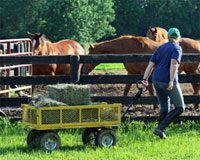