The first Saturday in May marks the day the Kentucky Derby is run. May 3, 2008 is the 134th Run for the Roses. Here are some fun facts about this historic race that were noted prior to this year’s event:

• Secretariat still holds the record for the fastest finish back in 1973 at 1:59 minutes; Monarchos, who ran in 2001, holds the second fastest record at 1:59.97 minutes; Northern Dancer was third fastest at 2 minutes back in 1964.

• Where do most of the Derby horses hail from? Kentucky of course! That state has seen 100 horses make it to the race. Behind Kentucky is Florida, which has birthed six Derby horses.

• Calumet Farm in Kentucky has had the most Kentucky Derby winners with nine.

• Women owners have played an active role in Kentucky Derby history since the early 1900s, but only five female jockeys have ever ridden in the race. A total of 13 women trainers have sent 14 starters to the Derby since the turn of the 20th century.

• 47 bay horses have run the race; 43 chestnuts; 9 dark bays/browns; 5 grays; 2 roans; and 2 gray roans. Winning Colors was the only roan to ever win the Derby.

• Two jockeys are tied for the most wins: Eddie Arcaro, who had five wins between 1938 and 1952; Bill Hartack crossed the finish line in first place five times as well from 1957 through 1969.

• Jockey Bill Shoemaker, whose Derby span was 1952 to 1988, mounted up the most times for the big race with 26 starts. He finished in first place four times. 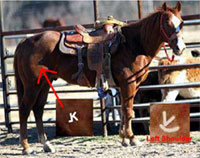