“The sport of Eventing must reach new heights in education, experimentation, data collection and communication in its quest to reduce–or even eliminate–the risk of tragic accidents.”

These were the main themes to emerge during the weekend from the FEI Safety Forum in Copenhagen (DEN), chaired by Olympic champion David O’Connor (USA) and attended by delegates from a remarkable 22 National Federations, their minds focused by the unprecedented nine rider deaths–seven of them in national competitions–in cross-country falls around the world in 2007.

It was agreed that although education of riders and officials remains a priority, riders must also take responsibility for their actions across country and must always retain the idea of respect for fences. This point was reiterated by two experienced international riders, Eric Smiley (IRL) and Andrew Nicholson (NZL).

And, following presentations by British, Dutch and Ecuadorean representatives, it was agreed that scientific experimentation with deformable–or frangible–fence structures must continue and that these types of fences should be used wherever appropriate.

“We owe it to riders to test material that can reduce the possibility of a rotational fall,” said Carl Bouckaert (BEL), the rider representative on the FEI Eventing Committee.

David O’Connor asked FEI Eventing Committee Chairman Wayne Roycroft (AUS) to take forward to the FEI Bureau meeting in April a proposal that a more sophisticated system of data collection of cross-country statistics by each federation should be funded and managed by the FEI. The current data, collected over the last five years, which reveals that most serious accidents occur at one- and two-star level, is comprehensive but does not include national competition statistics, nor a breakdown of fence statistics for the different levels of competition.

Delegates split into working groups and were asked to each produce two recommendations which would take the safety debate forward on a practical level.

FEI Eventing Committee member Andy Griffiths (GBR) chaired a group of ground jury members discussing use of the red and yellow flags on cross country to stop overly tired horses. The general opinion was that the yellow flags are confusing and should be abolished; that ground juries should be able to appoint officials, who should work in pairs, to stop horses on course; and that judges should make more use of the 25 penalties awarded for dangerous riding. It was also suggested that a DVD be produced showing good and bad examples of riding.

Chris Bartle (GBR), the German team trainer, reported back on safety equipment and rider protection. He said there needs to be investment on the testing of equipment, such as helmets and body protectors, which is sport-specific, and that there should be a more openness in allowing new manufacturers to produce approved new ideas for the sport.

He also said: “There needs to be more education for riders about how to fall–i.e. using the tuck and roll method–and formal theoretical training which will lead to a better understanding of the sport. For instance, there are too many people riding with too long stirrups which means they stay attached to the horse for too long when it falls; there are types of saddles which ‘block’ you in; and riders need to have more understanding of the consequences of injuries such as concussion.”

Yogi Briesner (SWE), the British team manager, reported on rider licensing and education. He said that the idea of rider licensing, which is now being carried out in countries such as France, was too complicated to process. His working party agreed that the medical card needs to be of more practical use and that falls information needs to be two-way: i.e. that the information about a rider’s fall needs to get back to that rider’s national federation on the Sunday night, so that the federation is aware the rider has had, for example, a concussing fall, in case they need to prevent them from attending another competition too soon. Each federation should be asked to appoint a safety officer.

Mark Phillips (GBR), the American team trainer, reported on cross-country design. His group, which included Pierre Michelet (FRA), Derek di Grazia (USA), Rudiger Schwarz (GER), Mike Etherington-Smith (GBR) and Giuseppe Della Chiesa (ITA), said that a horse should not be allowed to blow through a pole and then be asked to jump another fence afterward which would not give way.

“The frangible pin [which is used in Britain and America] is the only thing which has been scientifically tested, and is therefore the only tool we have to prevent the rotational fall without changing the nature of the sport. We recommend that the FEI implements this system world-wide, on fences such as the back rail of an oxer, coffins and sunken roads. We have the technology; we must use it.”

The course-designers also said that all portable fences must be fixed into the ground; that dimensions for measuring top spreads must be defined, and that one set of rules must be set for combination fences with black flags. They would also like to aim for a maximum of one jumping effort per 100m in CICs and for an extra five efforts to be permitted at CCIs in an effort to steady riders up on courses with flat terrain.

Another suggestion, which provoked lively discussion as well as some disagreement, was whether to penalize riders with 5 pen if they knock out a flag.
Think about it,” Mark Phillips said. “If it were a rule, would it make you ride better? If the answer is yes, it has to be a good thing. We need to instill the attitude in riders that cross-country is about jumping between the flags and that riders should respect the fence.”

David O’Connor summed up the day: “We’ve heard some very good conversation. Rider education, rider responsibility and rider respect is a major part of the way forward for a safer sport. We must also welcome the new ideas in fence construction; experimentation with deformable structures clearly works in reducing horse falls. And I will be asking the FEI to make data collection and more direct communication with national federations a priority. But the education side has to come from the national federations who will need to get programs in place; this debate has to be driven nationally. We have had some of the best brains in the sport here today, and I am very excited about the high level of discussion and its usefulness for the future.” 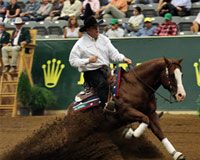