According to the Associated Press, federal officials temporarily shut down the National Wild Horse and Burro Center in northern Nevada on Wednesday because 130 horses have died there from health problems that could pose a threat to humans.

The voluntary closure of the center about 20 miles north of Reno is a preventive measure. Salmonella bacteria were found in some of the Mustangs, posing a risk to people and domestic animals, officials for the U.S. Bureau of Land Management said.

The center’s 160 acres of corrals serve as a holding facility for up to 1,650 animals the BLM rounds up from public rangeland. During their time at the facility, the horses are vaccinated and marked while awaiting shipment under the agency’s wild horse adoption program.

The problems apparently stem from about 1,000 horses that were gathered this month in northwest Nevada’s Jackson Mountains. According to U.S. Department of Agriculture veterinarian Al Kane, many of these horses were extremely weak from a lack of food and water due to drought, which made them more susceptible to salmonella.

The agency will review the center in 30 days to determine whether to extend the shutdown. 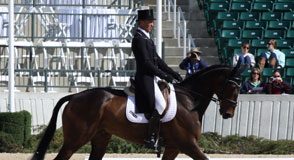 Andrew Nicholson in the lead after day one of 2013 Rolex...