As a sexagenarian, Hoketsu will be the oldest competitor to ever compete in an Olympics. Prior to Hoketsu’s performance during the upcoming summer Games, the oldest Olympian was Swedish shooter Oscar Swahn, who at 64 won a gold medal in shooting during the 1912 Stockholm Games.

Hoketsu is looking to make an impression during this year’s Games, and his age has little to do with it. He told Masanori Ariyoshi, a reporter for the Japanese newspaper Asahi Shimbum, “I will not be satisfied with merely participating in the Olympics. I want to finish in the highest ranking possible.” 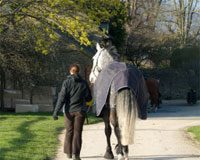