According to the Associated Press (AP), “nearly 20 racehorses, packed inside a double-decker trailer, were forced into crouching positions during a four-day sea voyage from the United States to Puerto Rico — causing injuries that have prompted a federal animal abuse investigation.”

Many of the Thoroughbreds, according to the report, were badly injured when they arrived in Puerto Rico from Jacksonville, Fla., last month, and many were frantic.

The shipment, which is now under investigation by the U.S. Agriculture Department, involved a double-deck trailer designed for smaller animals. Animal rights advocates have long sought to make the trailers illegal for the transport of horses. Only a few states currently have laws on the books banning double-deck trailers.

The cruel transport was reported after Jose Garcia, chief veterinarian at the Canovanas racetrack in Puerto Rico, filed a complaint with police when the crammed trailer arrived on May 12.

“If you’re going to stick horses on a boat and keep them there for four days, they’ve got to have room to move,” Garcia is reported as saying.

Puerto Rican police tracked the shipment to a Miami-based export company, Optical People Inc., before handing the investigation off to federal authorities. The U.S. Agriculture Department is handling the probe.

According to the AP, the U.S. Caribbean territory imports hundreds of Thoroughbreds from the U.S. mainland each year, mostly by airplane, for racing. 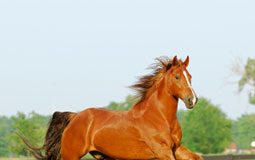