Missed the 2007 Rolex FEI World Cup Finals? Catch them this Saturday on the Animal Planet television network. A special 90-minute broadcast of the event will begin at 9 p.m. EDT May 12. The telecast will include the Finals in both jumping and dressage.

This year both the jumping and dressage competitions took place in Las Vegas, at the Thomas & Mack Center April 18-22. In 2005, the FEI World Cup Jumping and Dressage Finals took place in the same location simultaneously for the first time in history. The record-breaking success of those dual Finals prompted the FEI to bring them back to Las Vegas again.

“Interest in this year’s FEI World Cup Finals is at an all-time high, and we are truly excited that Animal Planet will bring the Finals to a national television audience,” says Pat Christenson, president of Las Vegas Events, Inc., producer of the Finals in Las Vegas. “Now, fans will have the chance to relive the event’s great moments, and those (who were) unable to attend will also be able to enjoy the accomplishments of the world’s best horses and riders.” 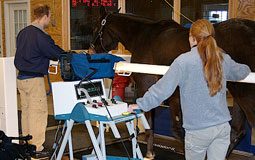