Clayton Fredericks of Australia rode Ben Along Time to victory in the Rolex Kentucky Three-Day Event, presented by Farnam. Fredericks claimed his first Four Star win with a three-phase score of 54.0 penalties.

Fredericks entered the culminating show jumping phase in third place behind U.S. riders Kristin Bachman and Heidi White Carty.  He and his 12-year-old Irish gelding completed the jumping course with no jumping and one time penalty to put the pressure on the two leaders.

Carty and Northern Spy, last year’s Reserve Champions, incurred 11 penalties to drop to a final fourth place finish with 63.0 penalties.  That left it up to Bachman, the overnight leader with a score of 48.2 penalties on Gryffindor.  Bachman, who had taken the lead with one of only eight faultless rounds on cross country, could afford one rail down but wound up being eliminating after going off course by mistakenly turning left instead of right after the eighth of 13 fences.

“All of us have been there,” said U.S. Olympic veteran Karen O’Connor of Bachman’s mishap.  “If you’re in this sport long enough, it will happen to you.  Kristin is a great rider on a great horse and she will be back in the top position before long.”

O’Connor made history with her performance on the popular Theodore O’Connor, the first pony ever to ride in the Rolex Kentucky Three-Day Event.  O’Connor, a three-time Rolex champion, placed third with a score of 60.1.

Placing second and winning the Rolex/U.S. Equestrian Federation Four Star Championship as the highest placing American was Phillip Dutton.  Dutton, a two-time Olympic team Gold Medalist when he rode for his native Australia, finished with a score of 59.1 on Connaught.

“I really can’t say enough about my horse,” said an elated Fredericks.  “I never expected this but he tries his heart out and has real star quality.  I am quite fortunate to be able to ride him.”

Sara Mittleider, one of a record four Young Riders in the CCI****, was honored with the Reeves Trophy as the top finishing Young Rider. Mittleider, who also won the award last year, finished an impressive 12th with 74.4 penalties on El Primero.

Prior to the start of the jumping phase, longtime British veteran Ian Stark was honored in a ceremony where he officially retired from the sport.  Stark then rode his mount Full Circle II for the final time, finishing with no jumping and only one time penalty for a final score of 74.1 and an 11th place finish.

The only Four Star Event in the Western Hemisphere, the Rolex Kentucky Three-Day Event, attracted a record attendance of 96,478 over its four days, including a record 46,922 on the cross country day.
The event will be broadcast on NBC television as a one-hour special on Sunday, May 6, from 5-6 p.m. EST. 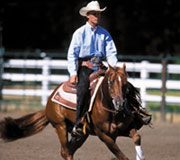 Tips for Your First Reining Competition