According to a report from the U.K. newspaper Bristol Evening Post, engineering graduates at Bristol University are carrying out research at a series of three-day eventing venues as part of efforts to make the sport safer.

The news account stated that Tim Deans and Martin Herbert have been hired on by British Eventing, which governs eventing in the U.K., to conduct the research. Herbert and Deans, who are both working toward their Ph.Ds at Bristol, are conducting research using sensors that analyze the vertical and horizontal forces exerted on a fence when it is hit, and a special high-speed video camera is being used to record a rider’s approach, jump and landing.

According to the news report, “pictures and force graphs can then be linked and, through the use of computer software, the horse and rider can be tracked through the jump, and any subsequent fall, in slow motion to see what actually happened.”

The research will hopefully lead to a better understanding of how to eliminate the high-risk rotational falls that can lead to serious injury in both horses and riders. 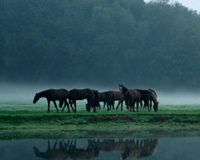