When the Saddle Club production team went to film Bonnie Bryant, author of “The Saddle Club,” at Equine Affaire in Ohio recently the production team met a lot of fans eager to talk to the writer of the popular books that inspired the TV series. Kids lined up for autographs, books and photos. They also brought along their personal letters and drawings of horses.

For those you who are not immersed in the world of “The Saddle Club,” the books and TV series follow the adventures of Stevie, Carole and Lisa, the three girls who formed the Saddle Club at Pine Hollow Stables. “The Saddle Club” books have sold more than 16 million copies worldwide and have been re-launched by Random House in North America this year. In 2006, the first series–“Girl Power Meets Horse Power”–was launched on public television stations across America. “The Girls are Growing Up,” the second series, will premiere on public television this fall.

To celebrate the launch of the series on public television, The Saddle Club Video Journals were introduced. They are included at the end of each live-action dramatic episode and feature real kids: the youthful fans who ride plus kids who just love learning about horses.

““The Saddle Club” has always been about friendship, fun and learning,” Bryant says. “I think the SC Video Journals are a natural extension of the positive messages in the books and the television series.”

If you know people who are devotees of “The Saddle Club,” they can meet author Bonnie Bryant in person. She’s scheduled to appear in the Youth Pavilion at Equine Affaire in Massachusetts (Nov., 2007). 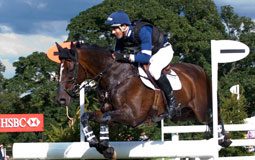 Burghley Horse Trials concludes with a new contender for the Grand...