Feb. 18 marked the third anniversary of the controversial ban on foxhunting in Britain, and the polls show overwhelming support for the law. According to the latest polls conducted by Ipsos MORI, a research services firm in England, approximately 72 percent of the British people polled said they do not want hunting of wild animals — foxes, deer or hare — with dogs to be made legal again and they think hunters should obey the law.

The Hunting Act 2004 was passed by the British parliament and came into effect on Feb. 18, 2005. It outlaws the chasing and killing of deer, foxes, hares and mink with dogs.

Sir Robert Worcester of Ipsos MORI says the latest polls clearly show that the British public still feels strongly about this issue. “Public perception remains for many that hunting wild mammals with a pack of dogs is cruel,” he says. “Before the ban was introduced, public support for a ban in our surveys typically ranged from 2:1 to 3:1 in favor — so this latest figure suggests that this pattern is continuing.”

John Rolls, director of Animal Welfare Promotion for the Royal Society for the Prevention of Cruelty to Animals, says, “This shows support for a ban on hunting is not just strong, it is rock solid. The British public strongly supports the ban, they want it to stay and no amount of distraction has changed that. It’s high time that pro-hunting campaigners gave up the chase and realize the public strongly supports the ban.”

Indeed, there are many who object to the ban and a vocal hunt lobby has organized in Britain to protect the interests of hunters. Horse and Hound, an equestrian publication based in the United Kingdom, reports that since Feb. 18, 2005, just three hunts have been convicted of any offense out of more than 300 hunts. According to the article, Simon Hart, the British chief executive of the Countryside Alliance, a pro-hunting organization, says the small number of convictions is evidence that “the Act is a waste of time for police and those trying to hunt within such a bad law.”

“The Act has failed to deliver anything for anyone,” Hart was quoted as saying. “It has not improved the welfare of the quarry species, nor the lives of those in the countryside who rely economically and socially on hunting. Neither has it delivered for those who promoted it.

“They wanted to see the end of the traditional hunts, which have as much support as ever,” Hart continued. “Most of all it has failed to give the police or courts anything except additional cost, wasted time and warped priorities.”

Regardless of the controversy, the ban is not expected to be repealed. 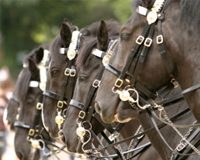