The North American Hanoverian Jumper Breeding Program (JBP) committee has announced a new awards sponsorship for the top placing Hanoverians in the 2007 Young Jumper Championships. The program’s mission is to promote the breeding of high quality Hanoverian show jumping horses in North America, and the awards provide an added incentive for owners to compete their Hanoverians in the Young Jumper Championship Series. The national competition is recognized by the United States Equestrian Federation (USEF), which officially ranks all horses competing in these age divisions. A trophy will be awarded annually in each of the classes as determined by the USEF national year-end rankings.

The AHS maintains a current directory of mares and stallions included in the Jumper Breeding Program, as well as a list of requirements and an application for entry on the society’s website at www.hanoverian.org. 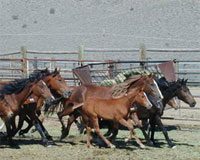