Home Horse News ??Yuma?g Actor Gets in the Saddle

Is the western genre riding tall in Hollywood again? Thanks to the mostly positive critical reviews and the box office success of “3:10 to Yuma,” we may yet get more “horse operas” into the cinema line-ups. That will require that more actors take riding lessons, however. Although stunt doubles can be used for rigorous riding scenes, close-ups must be done with the real actors to achieve any sort of realism. In the case of Ben Foster, who plays outlaw cowboy Charlie Prince in “3:10 to Yuma”, riding a horse is not the easiest skill for an actor to learn. He shared with the media that he’d never ridden a horse before filming began on the current blockbuster. Yet eager for the experience and a trooper at heart, he climbed in the saddle and filmed an entire day’s work. Somewhat later he realized the folly of his decision: He was black-and-blue pretty much everywhere. Ben Foster came to know firsthand the meaning of two words: saddle sore! 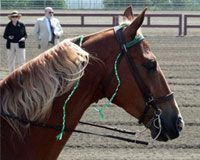