If you’re like many horse property owners around the country, suburban sprawl and increased development has made your neighbors these days less likely to be farmers and more likely to be folks unfamiliar with horses. This scenario can be tricky to navigate. But there are pros to living in closer proximity to others, and by taking some steps to be prepared, you can pave the way to good neighborly relationships.

The Perks of Owning Horse Property

Living in the country away from lots of people has its benefits. But horse property owners who live among residential neighborhoods can also have merit.

Steve Archer and his wife Andrea live in Richmond, Texas, a town inside Houston—Texas’s biggest city, population 2.31 million. They’ve run their reining horse training operation from this location for close to 30 years. Their place used to be surrounded by farmland, but today, their 10 acres are surrounded by subdivisions.

Archer says the availability of good food options is one perk he and his wife enjoy.

“We’ve been married 36 years, and we don’t know how to cook, so we go to lunch together every day,” Archer says. “We love being close to so many restaurants. It’s nice.”

Their property value has skyrocketed as the land around them has developed. Archer sees this as their “exit plan” for when the couple is ready to retire.

Being surrounded by houses can be a great funnel for a lesson program. The Archers have a training operation that has run up to 150 lessons a week in years past. Today, they have scaled back on the quantity of lessons.

“I don’t have my number on our sign anymore, because my phone never stopped ringing [for lessons], but we’re still probably busier than most people,” Archer says. “If you had the drive, you could do 300 lessons a week here.”

Similarly, Oak Brook Farms is on a horse property that’s been in existence since the 1950s, and the boarding stable has been in operation since the late 1980s, nestled within the town of Oak Brook, Ill., a suburb of Chicago. The town has a rich horse history, according to Oak Brook Farms’ longtime barn manager Suzanne Galdun. Stables in the area used to host regular polo matches, among other horse activities.

“We are the last public stable remaining,” Galdun says. “We’re in the middle of some million-dollar homes, and they’ve been here all along. There’s further development going on a piece of property next door to us.”

Horse property owner Marissa Brockette has a hobby farm with three horses in Shelbyville, Tenn., a town with around 20,000 residents about half an hour from Murfreesboro and an hour from Nashville. Her parents bought the property in 2004. They started with 24 acres in a neighborhood and then purchased the 12 acres next door, all on the back side of a country club.

“It’s nice, because we’re the only horses in the area, so we don’t have other horses coming through, and we don’t have to worry about [equine] diseases too much,” Brockette says. “It’s a nice, quiet neighborhood, and we can do our own thing. Everybody kind of leaves us alone.”

If you’re a horse property owner who has land with residential homes around it, Archer says you’ll probably end up spending more than you would in a less-developed area.

The Archers do have to contend with unfamiliar people walking up to their property, but good fences and locked gates has deterred unwanted visitors inside their property line.
Despite being in a residential area, Oak Brook Farms is at the end of a dead-end street, so it doesn’t get through traffic. But it does share a road with the back entrance of a subdivision, so speeding cars can spook horses being hacked near the road, and curious passersby sometimes stop their cars near the arena, which can distract riders.

Oak Brook Farms experiences a lot of walk-up guests­­—despite a sign posted that reads “Admittance by Appointment Only.” Galdun says the staff discourages these kinds of visits.

“We have lessons, local people know that we’re here, and some will drive up and just want to look around,” Galdun says. “For liability and safety reasons, we don’t let people just wander off.”

Brockette says passersby will sometime stop and feed their horses too—something she heads off as soon as she sees it.

“I’ll go out there and talk to them, introduce them to the horses, and tell them not to give them treats,” Brockette says. “We haven’t had too many issues.”

Being landlocked by residential properties means Oak Brook cannot offer grass turnout—all the lots are dry. Galdun says that may keep some potential boarders from keeping a horse there.

Galdun says if you’re living surrounded by houses, good manure management and disposal is the most important step—along with fly control. And even though Archer’s farm is meticulously maintained, he says the only trouble is his manure pile.

“I can only get them to remove it a couple of times a year. But I haven’t really had anybody say anything about it—they see the whole picture, and it’s very nice.”

“We honestly have not had any trouble, but I really think it’s because we keep it looking so nice,” Archer adds. “I could see if it was a dump, it might be different.”

Manure disposal is also a challenge for Oak Brook Farms. The facility’s compact 6-acre configuration doesn’t allow for manure spreading, and dumpster collection is expensive. Because they’re the only horse property in the area, the farm can’t share pickup charges. So if you plan on owning horse property that is more urban, you’ll need to know what your city’s regulations are for this.

Another thing to consider is the methods you use to train your horses. Especially if your facilities are visible from the road or to your neighbors, Archer says you need to take a critical eye to how you handle your horse.

“You may run into trouble with animal activists, or non-horse folks who don’t understand your methods,” Archer says. “Everything I’m doing to a horse when I’m riding, I am always thinking that I want that horse’s life to be better. But people can take things out of context. You need to be aware of how it looks to other people.”

Be aware of your area’s zoning and know how many horses you can have on your property. Brockette advises knowing your neighborhood’s rules, particularly about horses and the distance you need to keep them from your perimeter.

Galdun says Edward Vendel, the owner of Oak Brook Farms, has always been active in the local village, attending village meetings so he is a familiar face to many in the area.

Oak Brook Farms has signs posting the equine liability act so that guests are aware of the inherent dangers of horses. Having the facility mostly inaccessible to unaccompanied folks has reduced chances for accidents with neighbors. In addition, you should talk to an equine insurance agent about what liability insurance might be needed for your property.

“We haven’t had anything particular happen,” Galdun says. “We have a gate at the end of the driveway, and we are mostly fenced in. There’s no traffic on our street.”

The staff and boarders are kind to visitors, and when hacking down the street, they’re cordial to neighbors—all steps to increase goodwill in the area.

Galdun recommends feeling out your neighbors to see if they mind horses coming close to their property line. Clear communication with your neighbors is your best opportunity to foster goodwill and friendly relationships when owning horse property

“Having that conversation so that people on both sides have an understanding and expectation will help everyone not to be surprised by anything,” Galdun says.

This article about challenges face by horse property owners originally appeared in the September 2021 issue of Horse Illustrated magazine. Click here to subscribe! 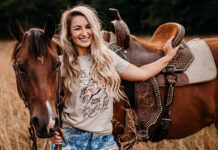 Finding the Perfect Saddle Fit for Your Horse