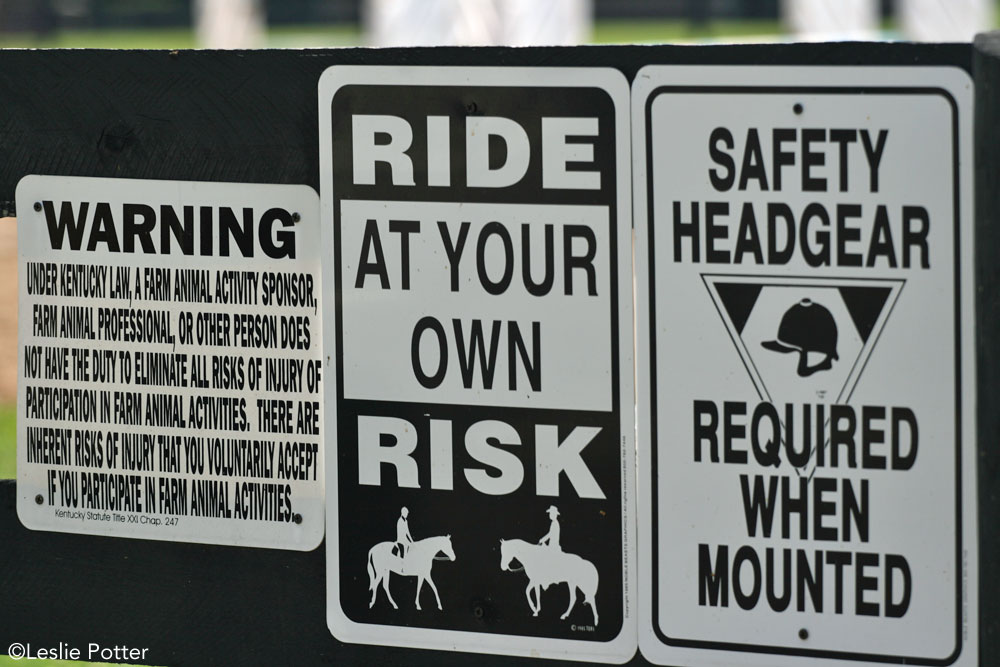 Owning a horse is supposed to be fun. But misunderstanding equine-related legal issues can cause horse owners hassle and heartache, not to mention a lot of expense. Educating yourself about these legalities helps ensure that your involvement with horses remains a pleasurable experience.

Julie Fershtman is an equine law practitioner in Farmington Hills, Mich. A frequent author and speaker, she has written more than185 published articles and has authored two books on legal topics related to horses. She has been riding for decades and lives on a small horse farm in the city. Krysia Carmel Nelson is an attorney in Charlottesville, Va., who also specializes in equine law. She grew up competing in hunters and jumpers and rode for Olympian–turned-racehorse-trainer Michael Matz during law school, and is a member of the Farmington Hunt Club.

Whether you keep your horse at home or at a boarding stable, ride for pleasure or competitively, these two horse enthusiasts and legal professionals share some hard-earned knowledge that might help you avoid the most common legal mistakes horse owners make.

Know the requirements of the equine-activity liability act that apply to you.

You have probably noticed signs posted at barns or around public riding trails warning that riding is a dangerous sport and is performed at one’s own risk, or something to that effect.

“As of October 2007, 46 states had some form of an equine-activity liability act,” says Fershtman. “All of them differ and most of them require that certain warnings or other language is included in contracts that equine professionals and/or equine activity sponsors use in their activities. (“Equine activity sponsor” means an individual, group or club, operating for profit or not for profit, which sponsors, organizes, or provides for equine activities.) Many of the acts also require signs to be posted [on property where equestrian activity occurs]. Under the laws of some states, those who fail to comply with these requirements lose the benefit of the statute if a claim is made against them.”

Nelson points out that equine liability laws are not “zero” liability or “total immunity” laws. “Everyone needs to understand that you still need to have insurance. These laws don’t prevent you from getting sued,” she notes.

Many equine professionals wrongly assume that their homeowner’s liability insurance protects them if something goes wrong in their business activities. Fershtman says that people sometimes learn this the hard way after a lawsuit is brought against them and their insurance company refuses to provide a legal defense.

Amateur riders should also consider insurance in some cases, and finding the right policy is best achieved with professional guidance. “It’s funny how horse people will talk about a great horse being ‘your insurance policy’–they’ll buy the horse, but then they don’t buy the right insurance,” Nelson explains. “They’ll spend their savings on purchasing the horse, but then not insure that investment against death, injury or illness (in insurance-speak, Mortality, Loss of Use, or Major Medical). They may not even think about getting insurance in case the horse hurts someone or gets loose and runs into the road causing a car accident (liability insurance). They may not have health insurance to cover themselves in case they get hurt. And most people don’t even think about whether they should consider disability insurance in case they get hurt in a riding accident and are laid up and unable to work for a considerable period of time.”

“I’ve had people come to me wanting to set up a commercial boarding and lesson barn, and then abandon the project after they price out the insurance they would need,” Nelson says. “It’s true that insurance is expensive, but having no insurance or not enough will be more expensive in the long run.”

Many aspects of dealing with horses are completely unpredictable and uncontrollable. As Nelson points out, “You can buy a lovely horse from someone at your barn, and the next day it puts a foot wrong stepping out of its stall and breaks a leg. There’s no legal remedy to pursue. Most of the calls I get involve problems where the caller would be in a much better position if she or he had gotten the right kind of insurance and/or had a good written contract.”

Get It In Writing.

Probably the most important point to consider for people involved with horses is to get everything in writing. Traditionally, for example, a horse sale could be guaranteed with a handshake, but in today’s world that is simply not good enough. And even when you get it in writing, it is important to pay attention to contract details to ensure that you’re protected.

“It continually amazes me that so few people in the equine industry use contracts,” Fershtman says. “Years ago, I handled a sales lawsuit involving a $400,000 horse that was sold on a handshake. I am now handling a lawsuit where a boarded horse died, but the stable owned by a highly successful businessman used no contracts.”

Fershtman points out that of the many calls her office receives, about 80 percent come from people who encountered serious problems with verbal contracts. “With verbal contract disputes, one guarantee is certain: They are rarely resolved quickly, easily or cheaply. They create a shouting match because the two parties of the transaction never agree on the contract’s terms, or even whether a contract existed!”

In contrast, a written contract offers solid proof of an agreement and can prevent disputes altogether or can help narrow the grounds of a dispute, if one should occur. The initial investment in a good written contract, especially one drafted by an experienced lawyer, often proves well worth the money.

“The importance of a properly written contract is that it accurately reflects the intentions and understanding of the parties, and is easily enforceable in the event one side doesn’t fulfill their obligations,” Nelson says. “You’d be amazed at how many people think they don’t need a lawyer to draft a contract. If you aren’t a lawyer, you are not really in any position to look at a form you’ve found on the Internet and understand its legal implications.”

Buying, selling and leasing horses are not just things that professionals do; everyday horses owners conduct these transactions, too, and usually lack the experience of a professional. Even though you might not be selling a $100,000 competition horse, it pays to protect your interests.

“If someone calls me and says, ‘I’m going to sell my horse, and this is the installment payment plan that the buyer has proposed,’ I’ll start asking questions like, ‘What happens if the buyer misses a payment?’ ‘Where is the horse going to live until it’s paid for?’ ‘What if the horse goes lame or dies before it’s paid for?’ ‘Who’s paying what commissions to the trainers involved?’ Usually these are things no one has thought of,” Nelson explains. “But they are all things that can be discussed and worked out, and then incorporated into a contract. And then if something goes wrong along the way, either side can look at the contract and be reminded of what is supposed to happen next.”

She adds, “In an installment purchase situation, sellers always seem surprised to learn that installment payments are not automatically forfeited if the sale doesn’t go through. They think it works just like with cars–miss a payment, the car is repossessed. Well, the reason it works that way with cars is because when you finance a car, you sign this big long contract that lets the finance company do that. It’s not something that’s just ‘the law’ and equally applicable to horses. You need a contract to accomplish that.”

Releases of liability (also called “waivers”) are probably the most misunderstood documents in the horse industry. In the many states that enforce liability releases, the courts demand that the releases be properly worded and signed. Fershtman shares a few problems with releases that she has encountered from actual cases in her law practice and lessons to be learned from them:

Know When to Seek Legal Counsel

People in the horse industry can be self-reliant to a fault. Horses take a lot of work and expense, and to make ends meet many horse people care for, raise, train and show their own horses; some even administer their own medications and shots. Fershtman points out that, these people often carry their self-reliance into legal matters, and she gets involved once the trouble becomes apparent. Seeking legal counsel from the get-go can avoid trouble later on.

“Simple contracts, such as a bill of sale, usually can be done without a lawyer,” Fershtman advises. “But the more complex contracts, such as releases of liability, installment sale contracts and leases, might vary greatly with the laws of each state. These types of contracts really deserve the attention of an experienced, knowledgeable lawyer. The lawyer can draft the contract or could be hired to review a contract and offer his or her opinion. Lawsuits, I believe, are best handled by lawyers, unless the matter is in small claims court.”

On the other hand, in some cases a lawyer is not the appropriate person to call. Nelson says she often gets calls from people who think they have “an equine law emergency.” “In my book,” she says, “there is no such thing.”

She recalls a particularly dramatic story about a woman who was both panicked and misguided. “I’ll never forget the woman who called me in tears to say she needed me to write her a note, right away, so that she could move her horse to a different barn. When she went to pick up her horse, the barn owner was standing in front of the horse’s stall with a shotgun, the stall was padlocked and the barn owner shot at her trailer as she drove away. I told her, ‘Ma’am, a note from a lawyer won’t keep you from getting shot. You need the sheriff.’ Then she asked if I would go with her. I declined. I told her I figured if the guy was willing to shoot at her, he’d be willing to shoot at me, too.”

Nelson says that probably more than half of the advice she gives out is not legal expertise, but plain old common sense. “But I think that’s why my law license says ‘attorney and counselor at law,’” she says. “If someone calls and I don’t think they need my services, I’ll tell them so.”