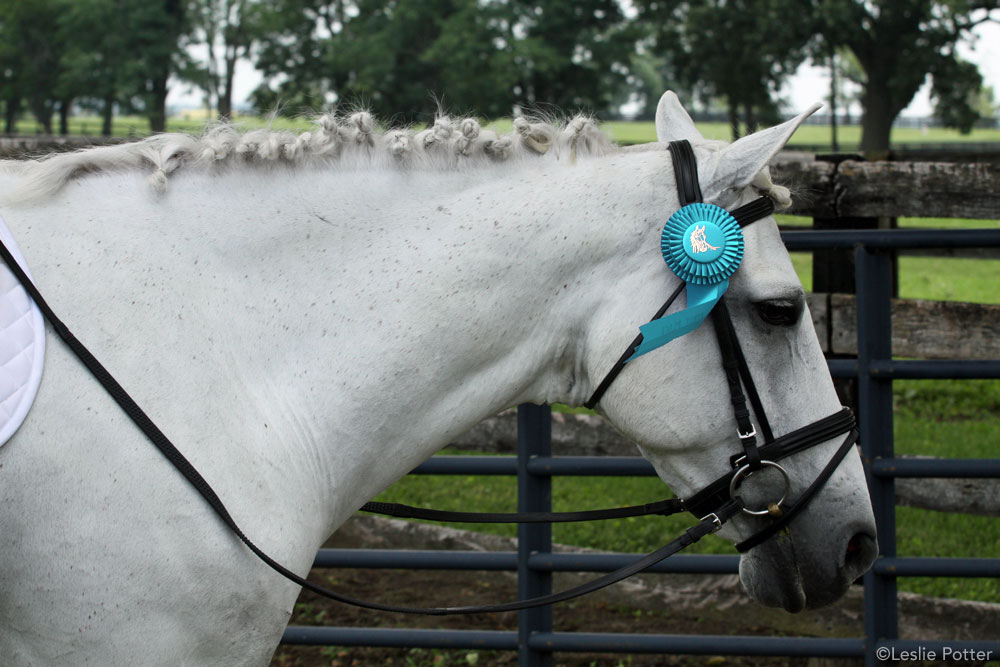 I was doomed even before I loaded my 25-year-old gray Connemara gelding, Wimpy, into the trailer for our first show when I was 16. Freshly bathed the night before, that morning I peered into Wimpy’s stall to find a green manure stain the size of a feedbag on his left hip. To add to the stress, my fumbling fingers couldn’t quite fit his stubborn white mane into the requisite teeny-tiny hunter braids. Bits of horse hair stood defiantly at odd angles; my horse looked like he stuck his hoof in a light socket.

As I silently panicked, a horse show mom who had arrived to the barn to start working on her daughter’s pony told me in a conspiratorial tone that she was up all night. Nerves? I asked. No, she said. Stomach bug.

Oh. My own digestive tract grumbled and my heart did a flip. Did I have a bug, too? Or was mine really nerves?

My first horse show was supposed to be fun. Wimpy was a push-button mount who was a veteran in the show ring. Unfortunately, he was also a bit gaunt and no amount of grooming could hide some ribs or my poor attempts at lead changes in the ring. In our mounted showmanship class we were last place. This wouldn’t have been so bad except a horse that refused a jump placed before us. So did another horse that threw a temper tantrum and bucked twice during his turn around the ring. Were we really that bad to place beneath these two?

To make matters worse, there were eight horses in that class. The judge had only seven ribbons. We were last place and the only ones without a ribbon. I looked longingly at that lovely seventh place ribbon and sighed.

The next event was the gymkhana. Being witness to my dismal previous performance, a friend let me ride her fiery Shetland pony, Twinkle, in the mounted games instead of the taller, gangly, and–let’s face it–not as nimble Wimpy. My sure-win veteran in the showmanship ring was replaced with a sure-win firecracker in the gymkhana. Win, place or show guaranteed.

Or so I thought.

First event: pole bending. Twinkle and I twisted and turned with the best of them but our bends weren’t as tight and we lost ground. And came in last.

Fourth and final event: fast walk. Finally, something that didn’t involve hand-eye coordination. The goal was to walk your mount as quickly as possible to the finish line. If you broke into a trot, the penalty was to spin in a circle, costing you time. Poor little Twinkle. Those little legs were no match for the larger horses. I pushed and pushed her to lengthen stride and she only did what she could: trot, trot, trot. So we circled, circled, circled. Last place.

As the sun set and we loaded our horses back in the trailer for the drive home, I counted five events that day, with two different mounts, and five last places. The common denominator? Me. My first horse show was a dismal result, indeed. But at the end of the gymkhana, I was handed a participant ribbon. And it was light blue. In a Herculean effort to stay positive, technically I did come away with a blue ribbon. More or less.

Anna O’Brien, DVM, is a large animal veterinarian in Maryland and a frequent contributor to Horse Illustrated magazine and
HorseChannel.com. Follow her on Twitter: @annaobriendvm

Featured Video: The Last Horse at the Rescue