Q: My experience showing horses has been with hunter/jumpers and eventing, all of which require helmet use. Recently I’ve branched out to try new disciplines, including western pleasure and saddle seat. I have begun to show in these divisions, but so far have been the only rider wearing a helmet at the shows I’ve attended. The rules clearly state that a rider may wear a safety helmet without penalty, but I’ve been told by fellow competitors and even trainers that wearing a helmet will put me at a disadvantage when being judged against traditionally attired competitors. Do judges notice or care whether a rider chooses a helmet over a derby or western hat? And do they have a style preference for those choosing to wear helmets in equestrian sports where they are not typically worn? 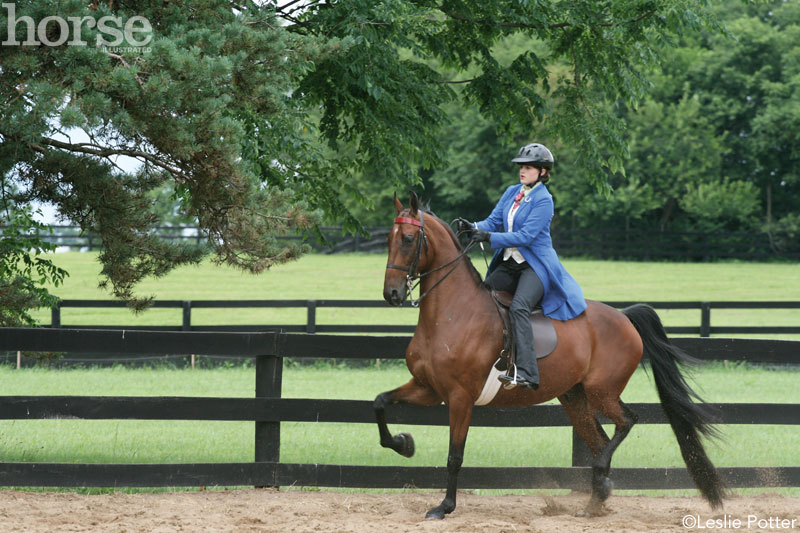 A: The rules are clear that no competitor shall be penalized for wearing protective headgear in any division. Since that is the rule and safety is a major concern today, we judges must follow that rule and be sensitive and concerned about a rider’s safety.
The United States Equestrian Federation (USEF) recently made it mandatory for all dressage riders to wear a helmet in all [national-level] classes, eliminating the traditional, formal top hat in higher levels of competition and when wearing formal attire such as a shadbelly. In a few states, the state itself (regardless of USEF rules) mandates that helmets will be worn on the show grounds by all children under a certain age, not just when they are riding in a class at a show.

When I’m judging a saddle seat class at a horse show, rated or unrated, I am personally not influenced by a rider wearing a protective helmet over a saddle seat derby or formal top hat. In the English pleasure classes, it is the horse that is being judged; the rider’s headgear doesn’t play a role in my judging at all. Yes, the rider plays an important role in how the horse performs under their direction, but it is the horse ultimately that is being critiqued. The best horse in a class always rises to the top of the judge’s card based on criteria being judged.

In a saddle seat equitation class, it’s the rider who is being judged based on criteria such as the rider’s overall position, use of aids, stature and ability to communicate with the horse to achieve a quality ride. Again, if a rider is wearing a helmet instead of a derby, that is not going to alter my judging for any class.

Let’s consider this: We have Olympic ice skaters, gymnasts, and other competitive sports that have costumes or traditional attire for their respective competitions. It is beautiful to watch these athletes performing gracefully to music.

Let us now add the helmet requirement. Although we all agree that the protective headgear serves a much-needed safety function, in my opinion, it diminishes the appealing look of traditional attire and overall appearance. It is much more pleasing to watch a competitor performing at a horse show in the saddle seat or western division wearing the traditional attire, including a derby, top hat or western hat. However, in the safety-conscious world we live in, we must not and should not penalize any competitor in any division for wearing a helmet.

Should we “dress up” a safety helmet to match attire? I recommend that you remain conservative so that you and your horse make the statement instead of your headgear!


CHRIS CASSENTI is a professional trainer/instructor at Chrislar Farm in Rowley, Mass., and a United States Equestrian Federation judge for several disciplines, including English pleasure, western, hunter pleasure and equitation.