Home Horse Riding and Training Horse Shows and Competitions Want a Belt with That Trophy? 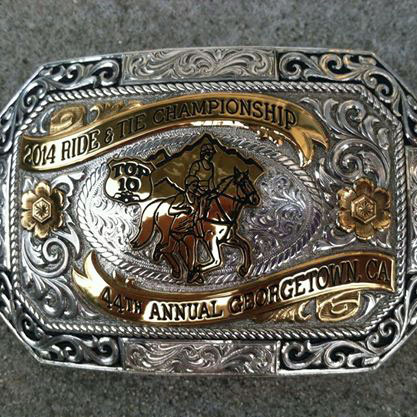 I was the only person in the room without reason to stare at my belly button, and now I was starting to feel envious.

Never had I wished so strongly for strangers to stare at my mid-section as if decoding a riddle. In fact, probably not since high school had I felt the sense that everyone around me spent much more time choosing their outfits. Or in this case, strategizing their outfits.

Before coming to this Western Dressage meeting, these ladies stood in front of mirrors debating between state fair titles and horse show championships. Then they clasped one of these enormous trophy buckles to their belts and headed out the door. Hair and makeup be damned; their best feature was accounted for.

Owing to my naiveté in matters relating to what I considered gaudy fashions, it never occurred to me that horseman and horse ladies actually wore those things as though they were practical, because let’s face it: they’re not (how many times have I scraped a knuckle or caught a shirt on a too-big buckle?). I figured they placed them like I did next to the other trophies up on the bookshelf next to Steinbeck and Whitman.

I looked around at all the shapes and sizes of attendees in the meeting, almost all of them donning a trophy buckle from various eras of horse showing. Some had cinched buckles the size of Thanksgiving platters in to fleshy mid-sections, others had paired them up with equally garish shirts tucked in to high-waist Wranglers. While not exactly inviting emulation, these were outfits of pride.

So this was how you did your bragging in the Western world. I guess I had become accustomed to the way it goes in other disciplines: you do your bragging verbally, or by maintaining an icy chip on your shoulder. If, for instance, you wanted people to know that you won the 1992 Kansas State Fair dressage championship, you would simply act cold and superior during social encounters with the assumption that somehow your accolades got conveyed through snobbery.

This way of strutting their achievements allowed Western folks to remain civil and relaxed, just like the horses they rode. They didn’t need to puff themselves up and sling around pretentious dialogue.

Other than discovering that Western buckles got their start in Hollywood depictions of cowboys in the 1920s (previously, cowboys wore suspenders) before making their way to rodeos as prizes, my research around the history of trophy buckles only revealed that they have become more ornate over time. The more details carved on their face, the more brag worthy. Perhaps the same applies to the clashing hues of metal I often see.

I thought of my Ride & Tie championship buckle leaning in my bookshelf right now against my favorite paperbacks. It had a fair amount of swirling curly details and information carved on its face. In fact, that’s what prevented me from wearing it in spite of being dang proud of winning it at a very difficult event last year. I found it somewhat gaudy. The achievement made me proud, but the buckle? Not so much.

Now I realized that I needed to put my tastes aside. Otherwise I was going to miss an opportunity to brag AND remain civil at the same time.

To draw a parallel, I remember when a race official draped my Boston marathon medal around my neck. A feeling of disappointment quickly eclipsed my elation when I noted that this moment would be the only time I got to wear that medal. After months of hard training and then running 26.2 miles in a heat wave with the flu, I cherished my accomplishment at Boston’s finish line. And, yet, you can’t really wear a race medal at any other time than after a race without looking perfectly ridiculous. So then what happens is you find yourself at a dinner party some months later with some newbie runner prattling on about her far-fetched plans to run Boston one day and this young buck is talking as though you have never heard of the event.

In that moment, you either choose to interrupt the conversation to point out that YOU already ran Boston… or you adopt the icy chip on your shoulder for the rest of the evening, because frankly it chafes that this person did not know you were even a runner, much less a Boston finisher. With a buckle, this encounter would have taken a different turn indeed. This realization has given me a whole new outlook. I am taking my trophy buckle down off its shelf and finding a belt adequately sturdy for it.

Now all that remains to be found out is if there are limits to buckle wearing (is there such a thing as wearing them too often?). Even so, I intend to push them. I’m going to wear that buckle as much as possible to make up for lost time. I better go see if I can attach it to my running shorts.

Liked this article? Here are others you’ll enjoy:
11 Ways to Show off Your Horse Show Ribbons
Life with Horses: A Pile of Purple Ribbons