As a prey animal, your horse is naturally cautious of the world around him. After all, horses have survived for thousands of years by relying on their flight or fight instincts—their ability to flee a perceived danger or stay and fight for their lives. Your job is to desensitize your horse to as many objects as you can.

The more things you desensitize your horse to, the quieter and more confident he’ll become. Your goal isn’t to make him so dull that he won’t react, but rather to teach him that he can trust you to take care of him when a spooky object appears, and to stand still and wait for instructions from you. 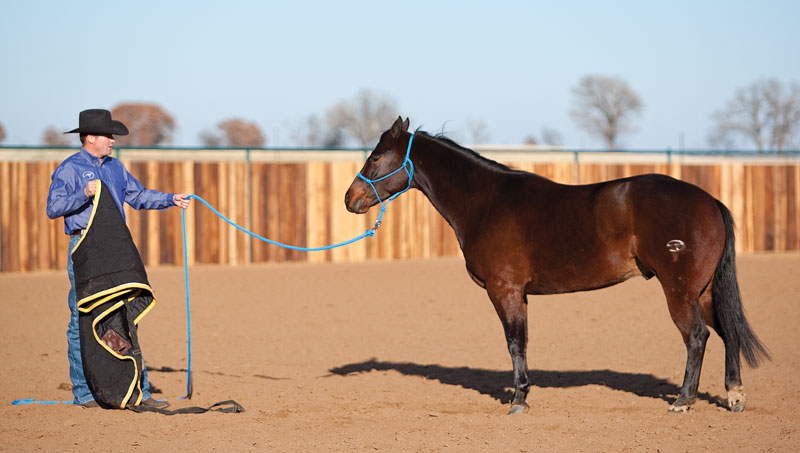 Tip No. 1: Don’t force your horse to confront a spooky object.
When a horse is frightened of an object, the worst thing you can do is force him to approach it. This will just cause him to become more nervous and think that there is a reason to be scared. If you want your horse to relax, you have to stop being the predator that takes a direct-line approach and start thinking more like your horse, a prey animal that is cautious. Rather than forcing the object on him, use the “approach and retreat” method, a step-by-step desensitization technique. Build his confidence by approaching him with the object he is scared of, and then retreating (taking the object away) when he stands still and relaxes.

The same approach and retreat theory applies if you encounter an obstacle on the trail that your horse is frightened of. Let’s say you come across a water obstacle and your horse plants his feet, raises his head in the air and refuses to move forward. Until they learn otherwise, most people’s first reaction is to spur the horse’s sides or spank him with the ends of the reins to get him to go through the water. A horse that is already frightened and using the reactive side of his brain gets even more upset when you try to force him to confront the object that he’s scared of, and it becomes an all-out battle to get him in the water.

Rather than forcing the horse through the water, you can use the approach-and-retreat method to make crossing the water his idea. In this example, you would ride the horse toward the water and just before he stops, you’d halt him and retreat (back him away from the water), which is the complete opposite of what the horse thinks you’re going to do. He thinks you’re going to force him to step in the water, but rather than forcing him toward the scary object, you’re backing him away from it. It’s kind of like a cat and mouse game. The more you say, “Don’t go, don’t go,” the more the horse wants to get closer to the water. You build up his curiosity until eventually he’s calmly walking through it and using the thinking side of his brain.

Tip No. 2: Don’t be sneaky.
The biggest mistake I see people make when their horses are spooking at an object is that they sneak around, saying, “There, there, Precious. This isn’t going to hurt you.” Ironically, this behavior just makes matters worse. The truth is that the more you use the approach-and-retreat method, the calmer and less reactive your horse will become.

Tip No. 3: Retreat at the right time.
Timing—meaning when you release the pressure—is critical when training horses, especially when desensitizing. When you’re desensitizing your horse, never take the object/pressure away until he stands still and shows a sign of relaxing. When he relaxes, he’ll do one of five things: lick his lips, lower his head and neck, cock a hind leg, blink his eyes, or take a big breath. If you take the object away while your horse is moving his feet and using the reactive side of his brain, you’ll teach him to be scared of the object.

Tip No. 4: Don’t pass up a training opportunity.
When your horse spooks at something, don’t just ignore it and move on. Look at it as a training opportunity. You should constantly be expanding your horse’s comfort zone. A horse’s comfort zone is made up of the environment and objects he’s familiar and comfortable with. When you first start working with a horse, his comfort zone will be very small because he won’t have been exposed to very many objects or situations. The more you work with him and introduce new objects to him, the larger his comfort zone will become and the quieter he will get.

Tip No. 5: Remain patient.
Resistance is normal, especially when you’re introducing a new object to your horse. It’s very common for a horse to move his feet, raise his head or get nervous when he first encounters a scary object. Don’t lose your temper when he resists you. Instead, take your time and work through the situation, approaching him with the object he’s scared of and then retreating only when he’s standing still and relaxed.