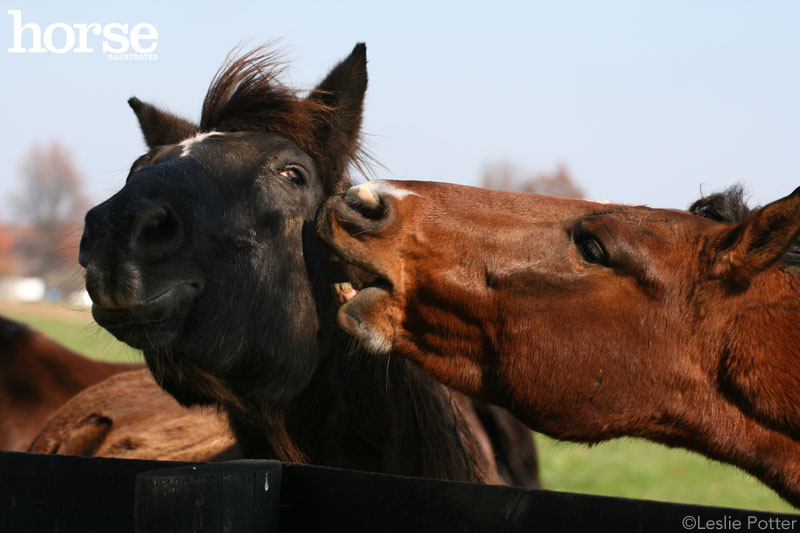 Horses display playful behaviors with other horses. For the safety of human handlers, it’s important to make sure these behaviors don’t occur during horse/human interactions.

Trainer Jill Girardi-Thomas is convinced that her Arabian gelding has a sense of humor.

“We put him in the cross-ties for grooming, and he’ll knock over all the brushes so that we have to pick them up,” Girarti-Thomas recalls. “We put all the brushes back, and he’ll do it again just to get a reaction that I swear he thinks it’s hilarious.”

When it comes to animal antics every horse owner has at least one tale to tell. And though people tend to overly humanize their horse’s actions, equine behavior experts say that horses often do exhibit actions that humans characterize as funny. Horses come by some of those behaviors naturally. Others they learn by interacting with their human handlers. Either way, owners should remember that the way they respond to their horse’s high jinks is no laughing matter.

According to Dr. Sarah Ralston, VMD, PhD, DACVN, Professor and Fullbright Scholar in the Animal Science Department of Rutgers University, horses display so-called “playful” behaviors among one another all their lives. Young males snort, nip and pin their ears, engage in mock fights and “play tag” to practice the social and physical skills they’d need to access the herd’s mares and to generally survive in the wild. Meanwhile, mares display their feral instincts by running to incite mock stampedes and bucking imaginary predators off their backs.

“In my experience geldings tend to be ‘funnier’ and mares tend to be more ‘businesslike,’” Ralston says.

When horses interact with humans, they demand attention by nipping at handlers, pawing the ground or kicking at stall walls, Ralston says. Owners often reinforce those behaviors with treats and other food rewards. But when someone fails to respond quickly enough or in a way that the horse expects, a the same behavior can become problematic or even dangerous, Ralston warns.

“There is really a fine line that is often hard to discern between a cute or funny action that just makes us laugh versus creating a monster by rewarding the same behavior,” Ralston says.

That’s why it is critical for owners to decide which equine behaviors they are willing to tolerate and which they absolutely will not allow, says trainer Clarissa Cupolo.

Here’s how she advises them to do it: