No matter what discipline you ride, odds are that you’ve experienced a horse that’s described as “one-sided.”

Just like humans, who generally prefer using their right or left hand for everyday tasks, horses can be naturally right-sided or left-sided. This is evidenced by being more balanced in one direction than the other. For example, they easily take one lead but will struggle—or avoid altogether—taking the nondominant lead, which is rough and unbalanced if they do get it. Or, they become worried and tense when asked to work on their nondominant side. 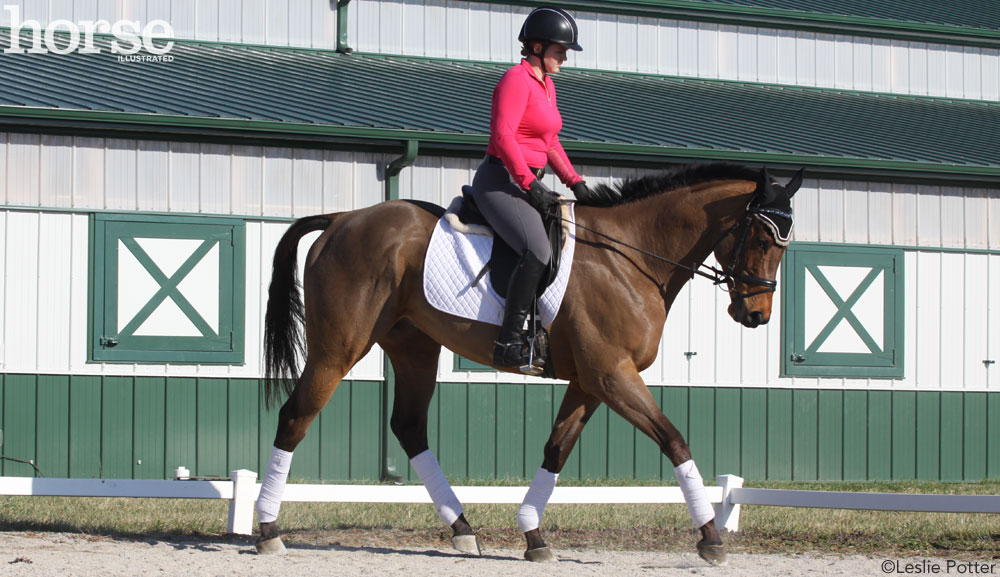 In addition to natural inclinations, other common causes of one-sidedness in horses are lameness, saddle fit, rider imbalance and training methods.

While some horses are quite naturally “ambidextrous” and move equally well on both sides (which is just as rare in horses as it is in people), the majority of horses can benefit from exercises that help them learn to move easily and efficiently on their nondominant side.

But the traditional ways of training a one-sided horse may not be as helpful as we used to think. In fact, according to Wendy Murdoch, the Virginia-based clinician internationally known for her insight on horse and rider biomechanics and anatomy, there are several myths surrounding training the one-sided horse.

“Over the years, we’ve gained new information about learning and brain function to help our horses develop symmetry and balance,” she says. “By using these approaches, we can help them achieve greater confidence and athleticism no matter what discipline they’re performing.”

Let’s take a look at some common myths and some new ways of helping our horses become better balanced.

Myth 1: Horses have to be trained on both sides equally because the equine brain does not transfer information from one side to the other.

Fact: Research has shown that the corpus callosum—the part of the brain that allows messages to be shared and transmitted between right and left hemispheres—is as fully developed in horses as it is in humans. This means that horses have cross-hemisphere connections, so they can perform an action on one side of the brain or body and the knowledge will transfer to the other side.
The myth told us that horses lacked the ability to pass information from left to right hemispheres. This was also the intent of having to “train both eyes” (working on both sides of the horse) because it was believed that each eye saw different things and could not transfer information.

As it turns out, horses have more cross-brain eye connections than people have. Rather than attributing the challenges of using the nondominant side to an incomplete connection in the horse’s brain, it is more accurate to describe it as the feeling you experience when trying to write with your nondominant hand.

Myth 2: Horses must be drilled repeatedly on the nondominant side to make them more balanced.

Fact: Horses that are struggling for balance going the difficult direction will equate difficult with worrisome; if we continually overtrain, we strengthen the existing patterns and fatigue the difficult side. This can activate the survival area of the brain, which results in a deepening cycle where learning new things becomes more and more difficult. The myth was that repetition would make the challenging side easier, but it actually reinforces and strengthens incorrect movement.

Myth 3: Horses avoid working on one side because they’re lazy, evasive or stubborn.

Fact: Working on the nondominant side is uncomfortable at the very least, and it can even be frightening to a deeply unbalanced horse. The horse’s goal is to keep his feet underneath him, so being forced to move on the unbalanced side can result in acts of self-preservation to avoid injury from falling.

In addition to natural tendencies of sidedness in horses, here are four common culprits.

To help bring the horse into balance, begin by working on the ground. “In general, if your horse has difficulty doing stretches or simple movements equally on both sides while you’re working on the ground, he certainly won’t be able to maintain balance when you’re on his back,” says Murdoch.

She suggests doing groundwork exercises and the stretching exercises in Activate Your Horse’s Core by Hilary Clayton, DVM, Ph.D.

Ride from Easy to Difficult

Murdoch’s teaching involves the terms “easy side” and “not-so-easy side,” as she takes riders through a process of noticing how their bodies move and feel on the easy side and then performing the movement on the not-so-easy side.

Horses respond to the same method. “Work with the horse on his easy side first,” says Murdoch. “Feel and observe what is working well and correctly on that side. Start at the walk and break down the movement into individual steps. Then change to the other side and observe what is different.”

You may discover, for example, that on the easy side, your horse stays upright in the corner and does not lean in. On the not-so-easy side, he begins to drop his inside shoulder because he shortens his step behind and then his head has to come up to balance himself.

“When moving back and forth from easy side to not-so-easy side, stay curious and explore,” she says. “What is he doing on the easy side that he’s not doing on the difficult side?” And be keenly aware whether you’re tensing up or holding your breath on the more difficult side, unconsciously telegraphing that this movement will be hard to do.

Tips for Balancing the Rider

“Rider imbalance is a huge factor that affects the horse’s balance and movement,” says Murdoch.

You can improve this even in small ways, such as switching your toothbrush to the opposite hand, mucking stalls with the rake on the opposite side, and writing the grocery list with your nondominant hand.

To further pinpoint areas that can be improved, Murdoch suggests the following ideas.

Wii Fit Balance Board and games: Wii Fit assesses balance and symmetry on both feet. If there is more weight on one side, this often translates to weighting that stirrup more than the other.
There are also low-tech balance boards available that you can stand on, even while watching TV, to practice improving your symmetry.


Stirrup length: If stirrups measure the same length when hanging from the saddle on a rack, but one appears longer when a rider is mounted, this can happen because 1) the saddle is crooked, 2) the horse has rotated his ribcage (often in response to pressure from the opposite side of his back) or 3) the rider is crooked.

Photos: Analyze photos of yourself to assess balance and alignment. Are your shirt buttons perpendicular to the ground, or do they lean one direction? Put a straight edge across your shoulders—are they parallel? Do the same along your belt line—are your hips level?

In daily activities, bring awareness to uneven weight distribution and habitual (but not necessarily effective) movement, in both horse and rider. “If the rider is not balanced over both feet, the horse will have to compensate by moving toward or away from the load,” says Murdoch. “By the same token, if the horse is unbalanced, the rider will follow the horse’s unbalanced pattern, even if it’s on a subconscious level.”

Ultimately, the goal is for riding to become a dance and a flowing partnership.

Horse Camping: Pack it up