Home Horse Care Horse Behavior Are You Untraining Your Horse?

It’s the little things that add up to a big deal with horses. I often hear people complain that they bought a well-trained horse and he became untrained. You’re training your horse every time you’re with him. If you let your horse get away with the little things, he’ll grow to see you as a pushover— someone that he doesn’t have to love, honor and obey. Instead, you’re someone not worth regarding at all. If your horse thinks he can get away with little infractions, soon he won’t follow your lead while you’re working on the ground or under saddle.

How do you make a change and make sure your horse isn’t getting his way? The answer is to boost your own confidence and approach your horse with a new and consistent set of rules. You can re-establish your position as the leader by doing groundwork exercises. Your goal won’t be to wear your horse out, but to establish clear communication and to make sure that your horse is listening as you do circling, sending, starting and stopping exercises. With groundwork to establish leadership, your horse will be tuned into your cues and know that he shouldn’t step or move without your direction. 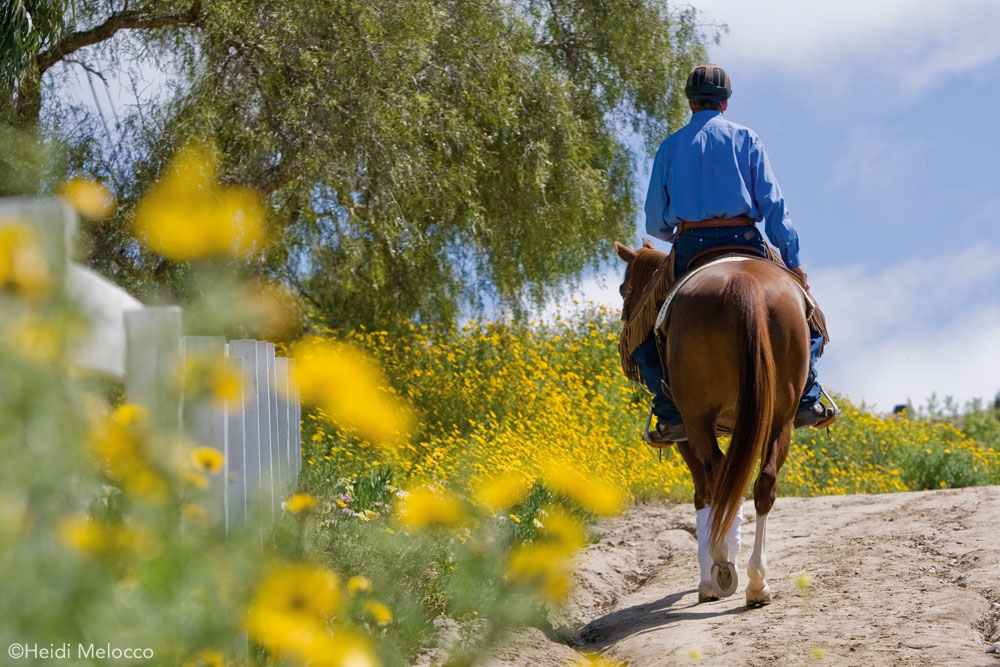 I often repeat, “An obedient horse travels on the path you dictate at the speed you choose.” If at any time you allow your horse to choose the path or activity without your cue, your horse learns he is in charge. Here’s a countdown of the top ways I see people relinquish their authority and sacrifice their leadership role:

1. Eating grass when he chooses.

The scenario: You’re leading your horse from his stall to the pasture for turnout or riding through a grassy field. Your horse dives forward to take a bite and pulls the lead rope or reins out of your hands. You jerk and pull and eventually get his head up, but it isn’t long before it happens again. Or, you just let him get in a few bites, thinking he deserves a little snack.

What your horse is thinking: Horses establish dominance in the herd by controlling resources such as food and water. The dominant horses always eat and drink first. When your horse thinks he can take food from you—even when it is horse food, not human food— he thinks he is dominant over you.

How this small behavior issue leads to big problems: When you allow horses to snatch food, it leads to a general lack of respect for your authority, which will carry into all aspects of your relationship. Once a horse comes to think he can control your actions, he may start pushing you around even more. If a horse learns that he can easily overpower you and to throw his body weight around, he may become unruly and downright dangerous. You don’t want a 1,000-pound animal taking charge of your space. Any interaction you have with your horse regarding food should be treated very carefully because of its direct correlation to dominance. You alone should control the food and when it is given.

2. Standing in “approximately” the place you requested.

The scenario: You ask your horse to stand still while you tend to something else, or for the vet or farrier. He stops for a moment then takes a small step forward or to the side, or tries to turn around or circle you. You may think “he didn’t move much.” He’s still in an OK spot.

What your horse is thinking: From his point of view, he can move when he wants and he’s looking for an opportunity to leave. He didn’t follow your direction and he’s thinking about his own plan.

How this small behavior issue leads to big problems: Your horse is acting as if you don’t even exist—he’s looking all around and thinking of anything but you. Your horse thinks he can go where he wants. You’re in danger of being stepped on or pushed.

3. Walking off without a cue.

The scenario: You step into the stirrup and your horse takes a step before you give him a cue. You think, “I was about to move anyway, it’s OK.”

What your horse is thinking: Your horse thinks he can choose when to move.

How this small behavior issue leads to big problems: If you routinely allow your horse to step off before you give a cue, he’ll learn he can choose when to move and when to quicken his pace. Soon, he speeds up and slows down when he chooses. He may also step forward as soon as your foot is in the stirrup and before you have had a chance to sit down. Then later, he steps forward before you are ready to step up. Soon he won’t stand still for mounting.

4. Veering to avoid an obstacle or scary object.

The scenario: You’re riding along a straight line in the arena and heading toward a banner attached to the rail. As you approach the object, your horse keeps moving forward, but veers to the middle of the arena so that he doesn’t have to pass the object closely. He veers away and you point him back to the rail.

What your horse is thinking: Your horse thinks you’re willing to compromise. If he wants to go in a different direction, he’ll get to go that way for a few steps before you correct him. He got his way for a while. He doesn’t have to go where you asked all the time.

How this small behavior issue leads to big problems: If your horse learns he doesn’t have to go where you ask, he may soon take you on a ride. I once saw a horse that had been trained decide that he didn’t want to ride in a new arena. After one lap around, he reared, turned and cantered straight to the gate and stopped. If your horse learns he can choose the path, he’ll choose the path.

Each of the scenarios demonstrates the horse’s lack of obedience and the rider allowing that disrespect. If you cannot control the path of the horse, it’s questionable if you have adequate control of a 1,000-pound flight animal. You can make a change and regain respect once you realize how you’ve given your power away.