As riders, most of our attention is usually focused on how well our horses go forward. In the show ring, our minds are cluttered with concerns: Is the jog too fast? Is my horse staying balanced at the lope? Did the judge see my horse quicken for a moment at the walk? Yet all of our tribulations over forward movement are for naught if the horse fails a seemingly simple request of the judge. You know the one. You’re standing in the lineup, sweating beneath your hat, thinking perhaps you squeezed out a ribbon in the class, when you spy the judge deliberately walking down the line of horses, nodding each time he makes his request. Yup, he’s spouting those four words so many of us dread to hear: “Please back your horse.” 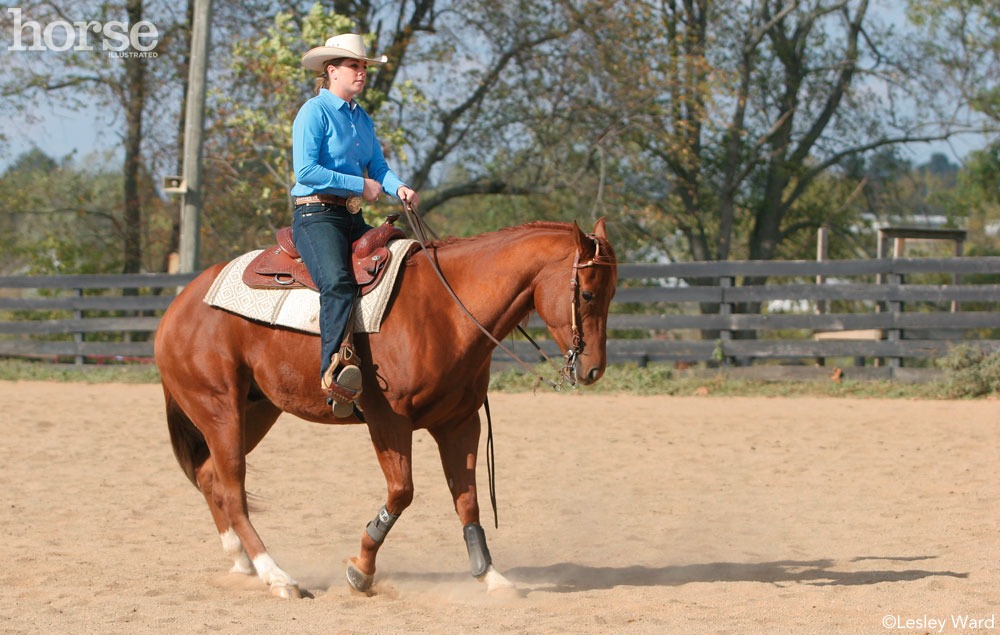 Teaching a horse to willingly back up, or reschooling one that resists the command, needn’t be so traumatic. Backing up is, after all, a vital fact of your horse’s training. Whether you’re competing in the show arena or pleasure riding on the trails, being able to safely and smoothly back your horse is just as important as controlling his forward movements.

Teaching a Young Horse to Back

Western trainer Judy Bonham has earned a reputation for producing a succession of winning trail horses in both youth and open divisions at major shows. And one requirement for all trail horses, both in and out of the arena, is that they back up, often while negotiating tight turns and obstacles.

Ideally, Bonham likes to introduce a horse to the concept of backing up when he is a foal. She believes in imprint training at birth, in which the foal is taught immediately to accept gentle handling by humans. She carefully nudges the foal to get him to shift his weight and get used to the idea of not only moving forward in response to a human, but stepping backward as well.

Some of her horses, however, come to her facility at a later age and present a different kind of challenge. She works yearlings in their halters, and teaches them to move forward with a light pull on a lead rope and also back up. “When I’m teaching a horse to back with a halter and lead rope, I press on his neck and chest muscles, and ask him to back up,” says Bonham. “I don’t take a shank and jerk on him, forcing him backward. I say, ‘back,’ cluck and push him back. As he backs up from the pressure, I relax and let him come forward.”

With 2-year-olds, Bonham teaches backing up during ground-driving training. “I drive the horse forward and teach him to turn,” says Bonham. “I also use both driving reins and ask the horse, with a cluck and a light pull on both reins, to back.” As soon as the young horse responds to the slight pressure and takes a step back, Bonham releases the rein. She never resorts to pulling the young horse backward; that only results in the horse resisting by opening his mouth and throwing his head up against the bit.

“When I get on the young horse’s back, I ask him to go forward, turn and move off my leg by pushing him with my leg and suppling him up sideways.” Once the horse is relaxed and responsive to her hand and leg aids, Bonham asks the horse to back. “I ask him to back with light, even pressure on both reins.” She also squeezes with both legs to get the horse to engage his hind end and round or lift up his back. “Now, if the horse freezes up, which a young horse normally does by bracing his front legs, instead of pulling him back with even more pressure, I go back to getting the horse to move around again from side to side,” adds Bonham. “Once the horse has frozen up and won’t go backward, I have to make him go somewhere. Then once the horse has loosened up, it becomes his idea that going backward isn’t so bad.” For example, if the horse evades backing up by locking his jaw and cranking his head and neck to the right, Bonham uses a direct or leading left rein and bends the horse in a circle to the left, getting him to become supple once again. Any displacement of the horse’s weight shows that he is beginning to yield to the rider’s aids. Once the horse relaxes, Bonham once more asks him to take a step or two back by picking up the reins, applying slight pressure and squeezing with her legs.

Backing in the Show Ring

As the horse’s training progresses, Bonham introduces some of the maneuvers that will be required in the trail classes. One example is teaching the horse to back up while turning, which requires him to be especially responsive to the rider’s leg aids. It is the pressure from the rider’s leg that tells the horse whether to shift his haunches to the right or left as he backs, effectively making a backward turn. “If I want my horse to turn his hips to the left, I push my left leg out, away from the horse’s side and use my right leg to displace his weight,” says Bonham. All the while her hands are not pulling on the reins, but merely lifting lightly up, cueing the horse to round and lift his back.

Bonham’s goal is to train the horse to be supple and giving in the bridle, and to lift his back once she picks up the reins and asks him to shift into reverse. As both an exhibitor and a judge, Bonham knows that what wins in the show ring is a horse that, when asked to back, demonstrates the least amount of resistance.

Bonham says that in rail classes judges don’t usually have a prescribed number of steps that they want to see the horses back. Mostly, the judge is looking for a horse in the lineup that gives no resistance when the rider lifts up the reins and asks for the horse to back. In contrast, a horse that freezes up, bracing his front legs and hollowing his back is marked down considerably.

A common mistake Bonham sees in the show ring is riders incorrectly asking their horses to back up. They forget to use their legs to engage the horse’s hindquarters, and just use their hands and pull. As a result, the horse never lifts or rounds his back.

Though a large class is rarely decided based on which horse backs up the best, Bonham sees backing up as an integral part of a horse’s education. By incorporating backing into your horse’s early training, you can avoid getting stuck when trying to go in reverse.

Further Reading
Horsemanship How-to: Teach Your Horse to Back 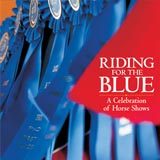 Book Excerpt: Riding for the Blue