In this exercise, you are going to send your horse through tight, narrow spaces without moving your feet. Horses are claustrophobic by nature and when made to go through tight, narrow spaces, they naturally want to use the reactive side of their brains. This exercise will be a handy tool in helping your horse overcome his fear of tight, narrow spaces as well as spooky objects, and is my go-to exercise when teaching a horse to load willingly in a trailer. It’s a great exercise for horses that want to pull back and fight against the halter because it teaches them to come off the pressure behind their ears. 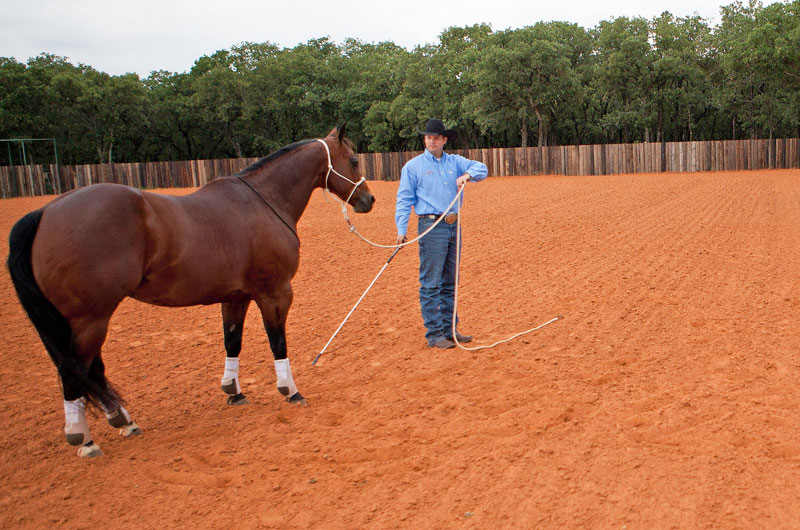 I initially teach this exercise to a horse by using a fence. Build the horse’s confidence by starting at least 15 to 20 feet away from the fence. Stand with your belly button facing the fence. The horse should be facing your shoulder. 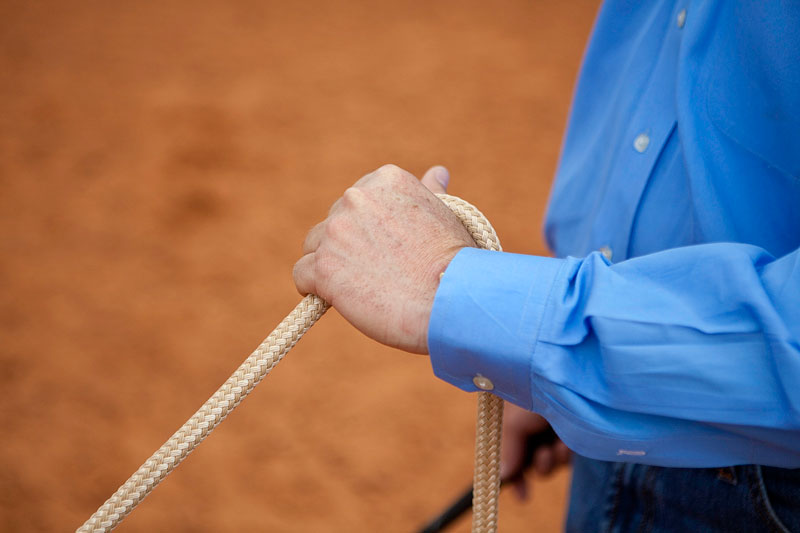 Hold the lead rope 4 feet down from the clip so that your knuckles are on top of the rope. With your other hand, hold the training stick as if you were shaking someone’s hand. If you’re sending the horse from right to left, you’ll be holding the lead rope in your left hand and the stick in your right hand. 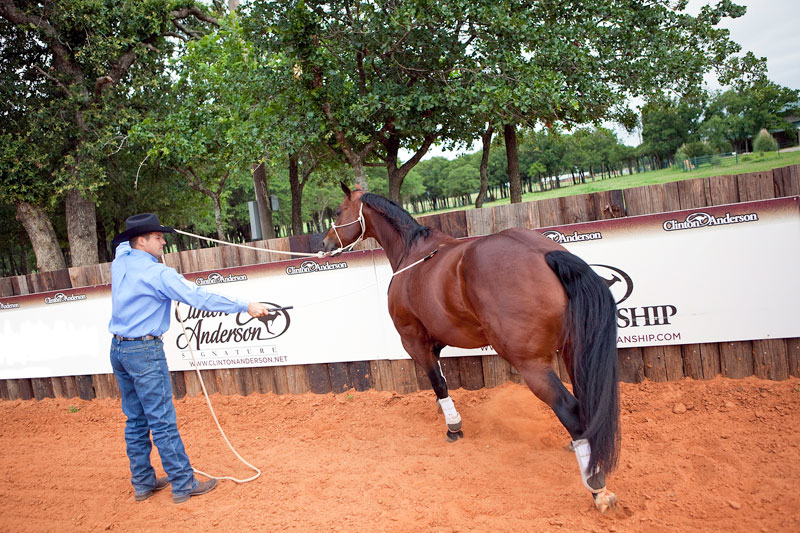 Ask the horse to go between you and the fence by pointing up high in the air in the direction you want the horse to go in so that you make contact with the halter. Ideally, the horse should come off the halter pressure and immediately move forward. If he doesn’t, use the training stick to tap the air toward his neck with rhythm to create pressure and encourage him to come forward. Tap the air with a one, two, three, four rhythm. If the horse doesn’t come forward by count number four, start tapping him. If the horse is still facing you, tap toward his head and neck to get his front end to move toward the fence. Once he’s facing the fence, tap behind his drive line (his girth area) to create forward motion. Continue tapping with rhythm, increasing the pressure every set of four numbers, until the horse comes forward through the gap. 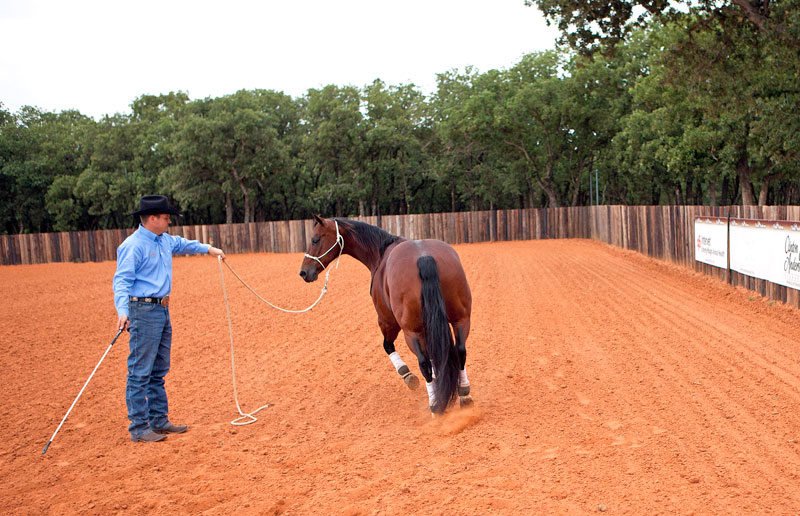 As soon as the horse starts to come forward, immediately release the pressure by relaxing the stick down to a neutral position by your side. Continue pointing with the lead rope to direct the horse forward. 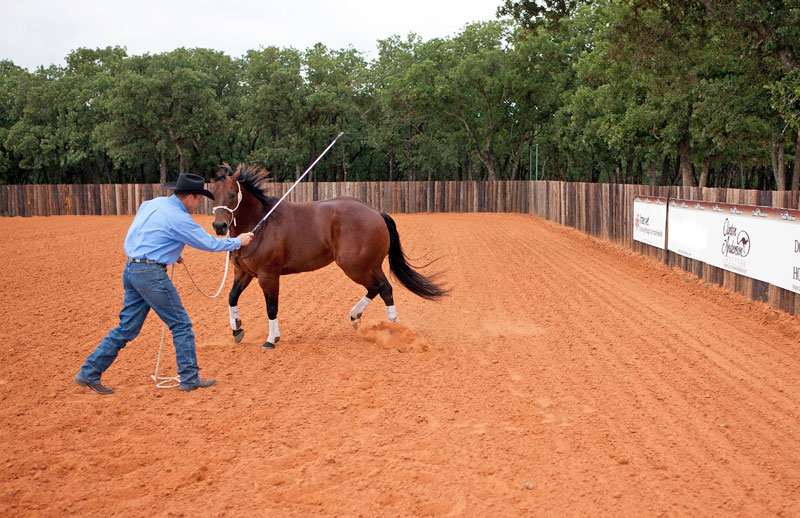 As the horse starts to get better at this exercise, you won’t have to use the stick at all because as soon as you look at his hindquarters, he will yield and give you two eyes. But in the beginning, stepping toward the hindquarters and creating more energy with the stick will make it easier for the horse to understand what you are asking for. 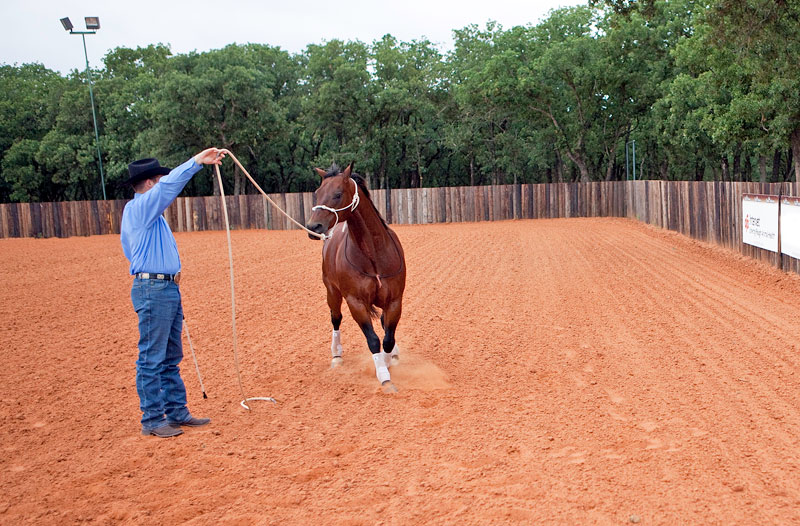 Pass the stick under the lead rope so that each of your hands switches tools. Then point up high in the air with your hand holding the lead rope to ask the horse to come back through the gap. If he doesn’t move, tap him with the stick. Tap the air first – one, two, three, four – with rhythm. And if the horse doesn’t move, tap him, ONE, TWO, THREE, FOUR. Increase the pressure with rhythm until the horse moves his feet forward. As soon as he does, immediately stop applying pressure with the stick and lower it to the ground. The only time you won’t increase the pressure is when the horse is already feeling uncomfortable; in that case, just continue applying the same amount of pressure until he finds the right answer. 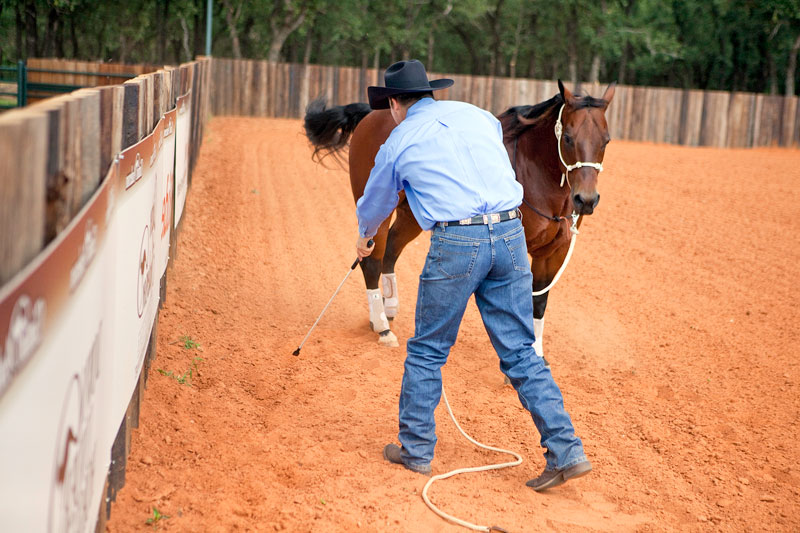 When the horse’s tail passes your belly button, stab your belly button with the lead rope and then step toward his tail with your foot. Swing your stick at the same time to really drive his hindquarters away. 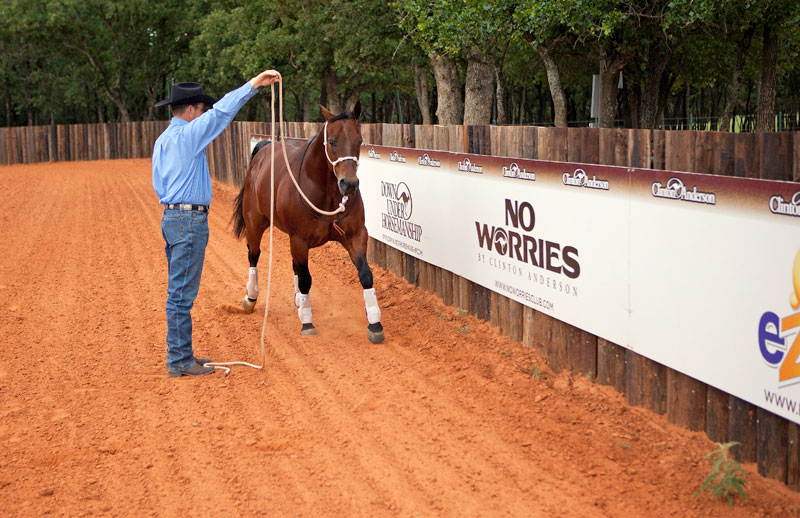 Gradually work your way closer to the fence until you are only 4 feet away from it. Try not to have a long pause between each time you send the horse through the gap. You want him to go through the gap, yield his hindquarters, and then immediately go back in the other direction. 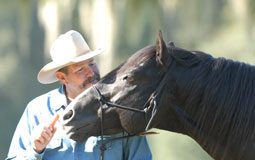