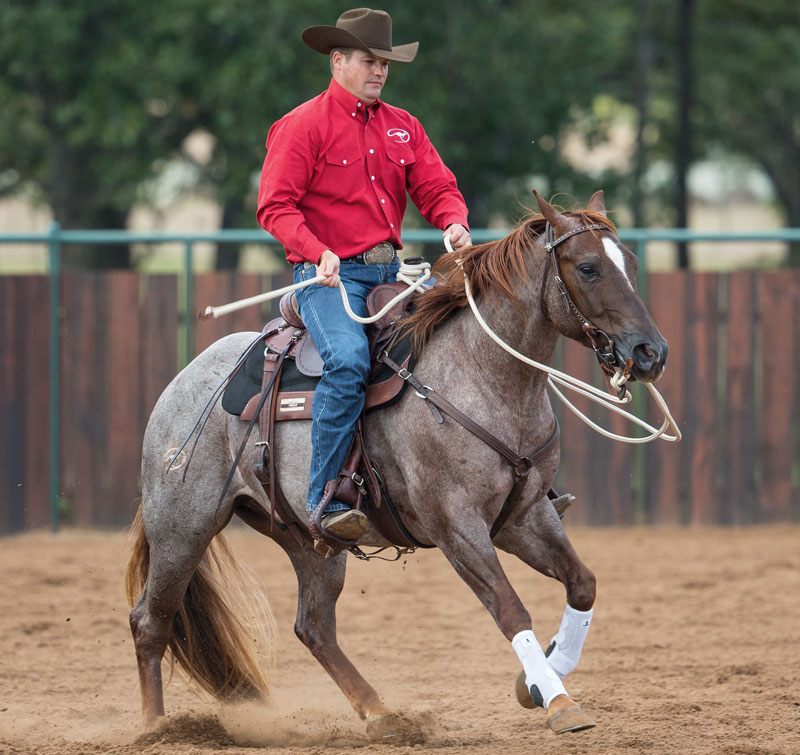 Riding a horse that refuses to go forward is like having a Ferrari with no gas pedal; sure, it’s nice to look at, but it’s absolutely useless. I teach horses to move forward off my legs using three separate cues: squeeze, cluck and spank.

To begin, find a safe, controlled area to practice in, such as an arena or a round pen. Ride your horse on a loose rein and don’t try to steer him. Your only goal will be to teach him to move forward off your leg pressure.

You’ll introduce the cue at the walk, and then move up the gaits as your horse catches on to the lesson. Ask him to walk forward by squeezing the middle of his ribcage with both legs. Squeezing is politely asking him to go forward.

If your horse doesn’t immediately respond by walking forward, cluck two times with your tongue. This warns him that he is about to feel uncomfortable if he doesn’t move. Continue to squeeze his sides with your legs as you cluck.

If he still doesn’t walk forward, spank him with the ends of your reins from side to side, or use a dressage whip to tap him behind your leg. Again, you should still be squeezing his sides with your legs. Don’t start off by spanking him really hard. Just gently spank from side to side. If he doesn’t respond, then gradually increase the pressure until he walks forward.

As soon as your horse walks forward, instantly release all the pressure: stop squeezing his sides, clucking and spanking. When he’s going forward at the speed you want, your legs should hang loosely against his sides, not applying any pressure.

The goal is to ask with the least amount of pressure possible until you get the response you are looking for. With a lazy horse, be prepared to put some effort into spanking him and sticking with it until he moves forward. Lazy horses will often kick out in protest when asked to move their feet, so you have to be confident enough to stay in the saddle and continue spanking with rhythm until your horse does as you ask.

If your horse stops moving, repeat the cues again until he walks forward. Always let him commit to the mistake and then correct him. That’s the only way he’ll learn to be responsible for himself.

When your horse is moving forward, practice transitioning from the walk to the halt and back again using the one-rein stop. Pulling back on both reins to stop a horse that doesn’t respect pressure can encourage him to pull against the bit, raise his head, grab the bit and bolt, et cetera. Using one rein gives you more leverage and helps your horse learn to read your seat.

Walk about 50 feet and then do a one-rein stop. Take your legs off your horse’s sides, sit deep in the saddle, and then slide one hand down the rein and pull it up to your hip. Hold the pressure until your horse stands still and softens his face. He should touch his nose to your boot, jeans, stirrup or fender before you release the rein.

Ask your horse to walk off again using the same squeeze, cluck and spank cues. If he responds by moving forward when you first gently squeeze his sides with your legs, there’s no need to cluck or spank. But if he doesn’t walk forward, cluck two times, and then spank if he is still ignoring you. Practice walking forward until your horse readily walks off as soon as you squeeze his sides with your legs.

Practice the same exercise at the trot and the canter. Be prepared to spank when you ask a lazy horse to move faster, because he’s likely to give you more resistance.

Liked this article? Here are others you’ll enjoy:
Earn Your Horse’s Respect with Clinton Anderson
Motivated to Move

What Does it Mean When a Horse Snorts?