Imagine a Sunday drive through a vineyard: the clippity clop of little hooves as you trot along, able to easily maneuver places a full-sized horse and cart could never venture. For champion Miniature Horse trainer Bryce Baker and his friends at Piece of Me Miniatures in Paso Robles, Calif., this bucolic scene takes place each and every weekend when they’re not busy showing their Miniature Horses in driving events. 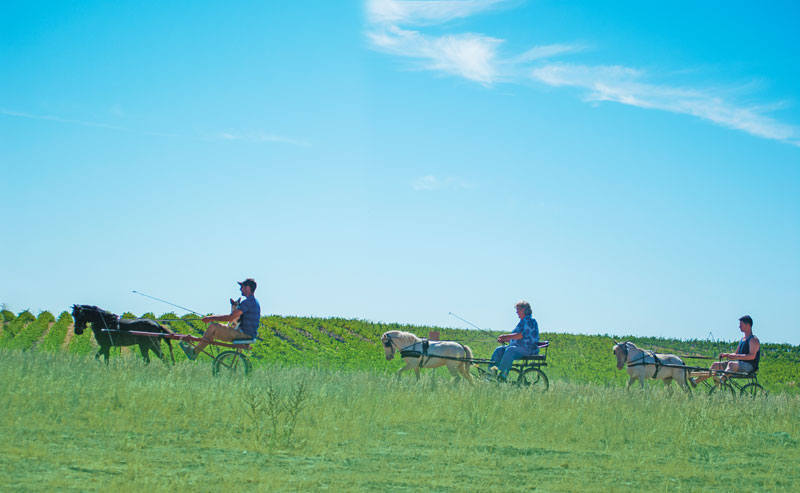 “I love everything about it,” Baker says of driving Minis. “They’re easy, fun, and you can take them anywhere.”

Baker began training cow horses as a teenager and worked under many top trainers, but a few years ago, he and his friend Shawn Hester traded a reining horse for five Minis, and a new passion emerged. As co-owners of Piece of Me Miniatures, they now run a Miniature Horse breeding and training operation, in addition to giving lessons. Baker competes regionally and nationally at American Miniature Horse Association (AMHA) and American Miniature Horse Registry events, bringing home many champion and reserve placings, including a recent 2014 AMHA World Championship in the senior stallion, 28 inches and under division; two championships and a reserve at the AMHA Western Regional Championship Show; and two year-end highpoints in the senior stallion division and junior mare division.

For those interested in driving Minis, Baker walks you through the process.

“The biggest question I get is, ‘What can I do with my Mini to get him ready to come into training?’ ” Baker says. “I always say to tie them up for an hour a day, or until they learn to stand still.”

Learning to stand quietly prepares the Mini for harnessing and standing patiently between the shafts of the cart. Of course, make sure they’re tied safely and securely, and that you keep an eye on them as you work around the barn.

To begin this process, he utilizes a loose side check with just enough pressure to turn the horse’s head to one side. “I barely tip their head to one side and do 10 minutes, and then 10 minutes to the other side,” Baker says. He also works on this concept manually using reins. “I’ll hold slightly but firmly until they give to it and then give them some slack. They learn that when I pull, and they give to it, they get that release of pressure as a reward.

“Once I see them giving to the bit well, I move to ground driving,” he continues. “When I ground drive them, the main things I’m teaching them are to move when I cluck, to turn and to stop.”
To teach horses to respect the cluck, Baker uses an “ask, tell, make” process. “That way we give the horse a chance to listen and obey the commands we are giving him,” he explains. “So to teach them to go, you cluck and at first nothing will happen. That’s the ask stage.”

If you get no response, move your whip through the air to get the horse’s attention or gently tap him on the hip to tell him to move forward.

“If the horse is still not getting the point, then that’s when you make him,” says Baker. “Cluck again and give a firm tap with the whip. By using the ‘ask, tell, make’ policy, it keeps horses from taking advantage of us and keeps whip use to a minimum. When I have to use the whip, it’s usually firm once, and then I don’t have to use it again.”

During the ground-driving stage, Baker doesn’t work on backing until the Mini has mastered the basics of moving off the cluck, stopping and turning.

“I use the fence a lot to help me get them turning well and stopping,” he explains. For example, if you drive the horse toward the fence and then ask for a left-hand turn, the fence will naturally help the horse turn more sharply without added pressure on the lines.

Once the Mini has mastered moving forward with a cluck and speeding up with a second cluck, stopping and turning while being ground driven, then it’s time to introduce the cart. “A lot of driving people say to never let the horse see the cart,” Baker says, explaining the use of blinders. “I don’t agree with that because you never know what can happen. I want my horse to see the cart and know what’s behind him.”

Going back to the tying groundwork, Baker introduces the cart while the Mini is securely tied with his halter. “I rub the cart on the horse and sack him out with it on both sides,” he explains. “At that point, nothing is attached. I rattle it around and let him smell it.

“Once he gets used to the cart and stands still, I put it over his back so that he has his body in between the two shafts, but with nothing attached. A lot of horses will want to swing their hind end to either side, and I want them to feel that they’re between the shafts.”

With the horse still tied up, the next step is to attach a rope to each shaft and place it over the Mini’s back. That way, if he panics, the cart can simply be lifted off and removed.

“Then I move the horse from side to side so that he really feels the cart,” Baker says. “I’ll also move the cart around from left to right so that he realizes he can’t run his hips or shoulders through it.”

After repeating these desensitization steps over a couple of days, Baker uses the rope and cart setup to walk the Mini around with the cart, where it can still be lifted off if necessary.
“I want the horse to hear it rattling around behind him,” he explains. “We walk everywhere for a couple of days until he’s totally good with it.”

When the Mini is accustomed to the cart, it’s time to harness up and attach it for real. However, for safety Baker starts ground driving with the cart before climbing in.

“I do that a day or two because it’s different than me leading them with the cart,” he says. “They have to think for themselves, and they get a little confused sometimes, and you have to help them out. I want to be there in case I need to move up by their head.

“Once the horse is ground driving well and will stop, turn, and go when I cluck, then I’m ready to sit in the cart and ask for the same things.”

If at any point the horse seems confused or is not accepting the situation, go back to the previous step where he felt comfortable.

People are often tempted to cut corners with Minis because of their small size, but treating Minis the same as larger horses is Baker’s best advice. Going step by step and first teaching the horse to give to the bit, then ground driving and gradually introducing the cart is key. Once your Mini is trained and driving, there are many ways to enjoy the sport. From the variety of show-arena classes to pleasure driving out on the trails, you can maximize the fun with your Mini in harness.

MICAELA MYERS is a freelance writer based in Wyoming. 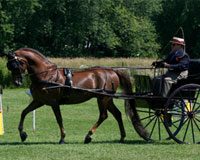