The popular saying, “talk to the hand because the face isn’t listening,” exemplifies rudeness in the world today. If you throw your hand up in someone’s face and say that, you are pretty much guaranteed to get a strong, negative reaction.

If you behave that way toward your horse by throwing up your hands and giving a strong jerk on the reins to get your “message” across, you can expect a similar reaction. People don’t respond well to harsh behavior and neither do horses. When you communicate with your hands, like your voice, your “tone” can be soft and patient or abrasive and impatient. If you were a horse, which would you prefer? 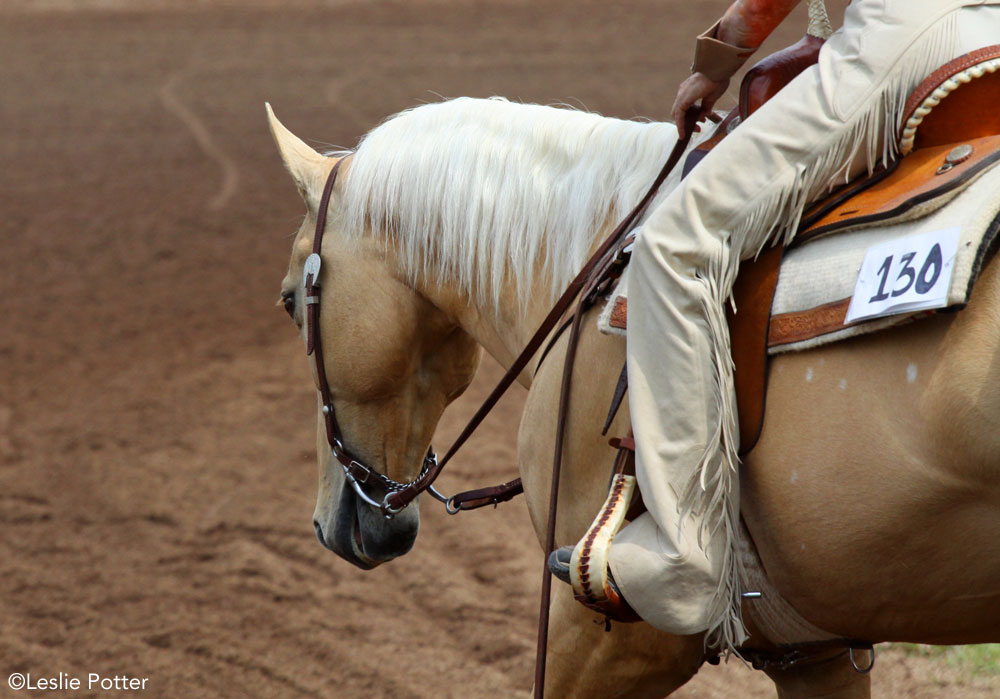 There is a definite right way and a wrong way to communicate with your horse through your hands, and according to trainer Terry Cross of Riverside Ranch in Weatherford, Texas, this is true whether you are showing or just pleasure riding. “Just because you aren’t being judged doesn’t mean you can disregard what you are doing with your hands,” says Terry, who has been training western pleasure and all-around American Paint Horses and Quarter Horses for 15 years. A testament to Terry’s training are his students and horses who have earned multiple world and reserve world championships.

The key to communicating effectively with your hands, Terry says, is to use them to ask, not demand. Every time you pick up your reins, you are sending your horse a signal, like a warning, that you are about to ask him to do something. If you pick up your reins and just start jerking on your horse, what you are doing is punishing him for something when he doesn’t know what he did wrong. Make sure your horse understands what you want before you reprimand him for not doing it.

The fool-proof way to accomplish successful communication is to adopt Terry’s soft-hand habits. “It’s a three-step process that entails first asking the horse to do something, then showing him what you want if he doesn’t understand what you are asking him, and, finally, telling, or reprimanding, him if you know for certain that he understands the question but isn’t responding to being asked,” Terry explains. “The basic concept is to keep everything soft and slow,” he says. “You want your horse to act, not react. You don’t ever want to do anything to scare your horse. This isn’t Fear Factor.”

You always want to start with the first step, Terry explains. “For example, to ask your horse to turn [on a horse trained to neck rein], pick up your hand slowly and lay the rein lightly against the horse’s neck. Then give him a chance to respond. An experienced horse should respond quickly; a less experienced horse may not respond as quickly, so it’s important to give him a chance.”

Don’t be a Nervous Nelly

Have you ever worked for someone who kept you on edge all the time? Someone who was always barking orders at you, drilling you day after day without any break or reward? More than likely, that person made you miserable and, as a result, you hated your job. Horses, says trainer Stephen Stephens, owner of Riverside Ranch in Texas, are the same way.

“Insecurity in people is directly translated to the horse,” he says. “You can see Nervous Nelly coming with her horse. Everything she does to the horse is abrupt, and the horse reacts abruptly as a result. Insecurities go hand in hand.”

Nervous Nelly’s horse doesn’t trust her. “You have to build your horse’s trust,” Stephen says. “The horse needs to know that when you pick up the reins you aren’t going to hurt him.”

If your horse doesn’t understand what you are asking him, or he’s not paying attention to you, then you need to show him what you want. “If I ask my horse to turn by laying a rein against his neck and he doesn’t respond, then I will pick up my inside rein and guide him into the turn,” Terry says. “Once I’ve shown him what I want, I should be able to go back to asking him. If not, I show him again.”

Through repetition, the horse learns what you are asking. This, however, requires patience, which is something riders sometimes lose. Therefore, Terry says, you need to continuously remind yourself to communicate softly with your hands. Terry’s trick to keeping hand movement soft and slow is to pretend they are weighted. “I tell all my students to pretend they have weights on their hands,” he says. “They should move their hands slowly so that the horse gets that warning. It means, ‘This is your warning; this is your cue.’”

Terry says that pretending to have weights on your hands is different than being heavy-handed. “Someone who is heavy-handed is someone who is always jerking on their horse’s mouth. They clench the reins and never give the horse a release.”

The third step, the telling step, is the reprimand. This is applied only when the horse understands what he is being asked to do, has been shown what to do and for one reason or another isn’t doing it. For example, if your horse ignores you when you ask him to turn, you can “tell” him to turn by using a stronger inside rein and bumping him with your outside leg to get him moving. You are sending a message that says, “Do it, now!” This third step, says Terry, should only be used on the trained horse, never a green horse or even a sensitive horse, and it should be followed with a release as soon as the horse responds.

“We have some horses that are a little bit more temperamental that never leave the show-me stage,” Terry says. “If I start telling them, they get their feelings hurt and don’t want to do it.”

When Terry starts lessons with a new rider, he begins by having his student hold the split reins in two hands. By riding two-handed, he says, the rider has more control and at the same time learns how that control was developed in the horse: The rider learns the training process that the horse went through from being ridden with two hands to being ridden with one, which in turn helps the rider transition from riding with two hands to riding with one.

When riding two-handed, Terry recommends crossing the split reins over the withers. “This way, if you drop them, they are right there to pick up again,” he says.

The correct way to hold split reins when riding one-handed is to hold them with your palm facing downward, the knuckles pointing forward and with the index finger only between the reins. The ends of the reins should hang down the same side of the horse as your rein hand. The reins should be held lightly in the fingers, not grasped in a fist.

Walk into any large tack store and you will be amazed at how many quick-fixes, big bits and gadgets are available. The problem is that some of them can be downright inhumane if not used properly, and yet none of them come with manuals.

“People see these gadgets, then they see someone of status using one and they think, ‘that’s their secret,’ and they go out and buy one,” says trainer Stephen. “But if you go to a bigger bit, you are just going to scare your horse.”

The person with the biggest bit rarely wins. “When it all comes down to it, when you have to take all the gadgets off and walk into the show pen, the horse that has had the least gadgets used on him is going to be the most comfortable,” Stephen says. “The horse that has had the most gadgets and then all of a sudden is set free won’t know what to do.”

Although many breeds such as Arabians and Morgans are shown in romel reins, American Paint Horses and Quarter Horses showing in pleasure classes have been shown almost exclusively in split reins since the 1970s. The preference between romel reins and split reins translates to the various breeds’ conformation, Stephen says.

“Romels are designed to be a closer contact rein,” Stephen explains. “Romel horses are more up in the bridle and shoulder. It’s a whole different style of riding. If you use romel reins on a [stock] pleasure horse, you are going to totally change his topline.”

According to Stephen, romel reins are typically used with a bit that has a higher port than what you see in most stock horse pleasure classes, where mild correction bits, such as a Tom Thumb or a bit with a medium-length shank and broken, hinged or straight mouthpiece, are popular.

“If you teach your horse to be soft in the bridle, then you don’t need anything more severe,” Terry says. Both Stephen and Terry start all their young horses in sidepulls and snaffle bits while they are in the “asking” stage of training. When they are ready for the “showing” stage, they will use a snaffle with a shank so that the horse will want to respond to the pressure quicker.

“Good habits with your hands should begin before you ever get on your horse,” Stephen says. “Be organized before you mount. Have your reins gathered up, so your horse will stand square and still. If your reins are a mile long and your horse takes a step as you are mounting, your first reaction is going to be to scramble to gather up all that loose rein and then jerk your horse back. If that is the first impression you give your horse, you are setting a poor precedent from the get-go. It doesn’t matter if you are trail riding or showing. You still need to pay attention to what you are doing.”

Whether you are riding with two hands or one, you still need to keep your body square, Terry says. If your body isn’t square, you won’t be able to use your leg cues correctly. However, while it is important to ride in a poised yet relaxed position, being too relaxed can sometimes be as bad as being too tense. “If you are so relaxed that you are slouching in the saddle and not sitting square, this will also affect your horse,” Terry says.

If all riders could learn these three simple steps—ask, show and tell—and develop these into good habits, they will change the way they use their hands, Terry says. “Establishing this system gives you something to go back to,” he explains. “It’s what trainers refer to as going back to the basics. If you ask and then reward, any horse at any level is going to respond positively to that. Just keep it simple and give your horse a chance to respond. Be polite to your horse.”