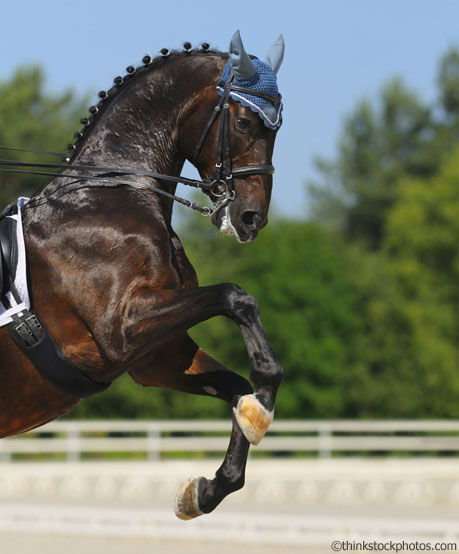 One minute you’re riding along and everything is fine, and the next thing you know, your horse erupts into a bucking fit. Sound familiar? Problem behaviors under saddle are fairly common, but that doesn’t mean you should just accept them.
World-class rider Gina Miles offers tips on how to correct and prevent these common forms of equine misbehavior. As an eventer, Gina is used to working with fit and exuberant horses.

One step that’s often overlooked when a horse begins to exhibit problem behaviors under saddle is to get him evaluated by the vet. “Whether it’s bucking, rearing or another form of disobedience, the first thing to do is rule out any physical problems,” says Miles. The bottom line is that if your horse is in pain, he’s very unlikely to have a relaxed, compliant attitude under saddle.

“I see a lot of horses that start bucking, and it turns out that the saddle doesn’t fit, or the horse has ulcers, or his teeth are really bad,” says Miles. Particularly in the case of bucking, she advises that back soreness and saddle fit should be the first areas investigated.

Even if a horse checks out fine from a health standpoint, there are things a rider can do to physically irritate a horse. “Make sure your position is good,” says Miles. “Many horses buck if the rider’s leg is too loose or slips back, goosing the horse in the flank.”

If you’ve ruled out all possible physical causes and determined that your position is solid and your horse is not in pain, then you can begin re-training him.

“When people have a horse that bucks, they often try to slow him down, but the best correction is always to make him go forward,” says Miles. “If you’ve got a horse that wants to put his head down, you need to get his head up and send him forward. Horses have a harder time getting a powerful buck in when they’re moving forward.”

Although bucking is perhaps the most common form of under-saddle resistance, other horses opt to bolt or rear, two very dangerous behaviors. “Both rearing and bolting are extremes of the same thing—the horse getting behind your leg and not moving obediently off of it,” says Miles. “The extreme of rearing indicates a complete loss of forward movement in response to the rider’s leg, whereas bolting is actually the opposite reaction to not accepting the rider’s leg.”

Miles recommends going back to groundwork if necessary to get your horse to accept and move off your leg. Simply applying pressure to his side with your hand until he learns to immediately yield sideways is one exercise you can try, as well as getting him to back up and come forward with a light request. There are many books and DVDs available on groundwork programs if you want to delve deeper.

“Respect issues are really amplified under saddle, but they’re usually there on the ground, too,” says Miles. By ironing them out on the ground first, it will make gaining your horse’s respect under saddle that much easier.

An experienced instructor can be of great assistance when your horse begins to exhibit problem behaviors.

“Riders need to take these problems seriously and not feel ashamed about asking for help from a professional,” says Miles. “You don’t want your horse to make a habit of a dangerous behavior; you want to nip it in the bud before it becomes too serious. Usually it’s a much easier fix in the early stages. If the behavior doesn’t resolve itself pretty quickly, I would definitely recommend finding somebody locally who can sit on your horse at least once and help you work through the problem.”

By using these methods, you’ll be able to pinpoint the root cause of your horse’s resistant behavior. Always prioritize your safety by wearing a helmet and enlisting professional help when necessary. The reward of a happy and respectful horse will be well worth the effort.

Gina Miles began riding at the age of 7 in Davis, Calif. A trip to the 1984 Olympics in Los Angeles at age 10 confirmed to her that three-day eventing was the direction that her riding would take.

In 1999, Thom Schultz and Laura Coates imported the 5-year-old Irish Sport Horse McKinlaigh for Miles to ride. In 2007, the pair earned a team gold medal and individual bronze at the Pan American Games in Brazil. In 2008, they won individual silver at the Beijing Olympic Games.