Trail rides are supposed to be relaxing and enjoyable, but are your rides being ruined by barn sour behavior, spooking, jigging, or your horse’s insistence to always lead or follow? Don’t worry, you’re not alone. We consulted three experts with tens of thousands of trail miles among them. They’ve had plenty of experience dealing with these issues, and have developed a number of reliable solutions. 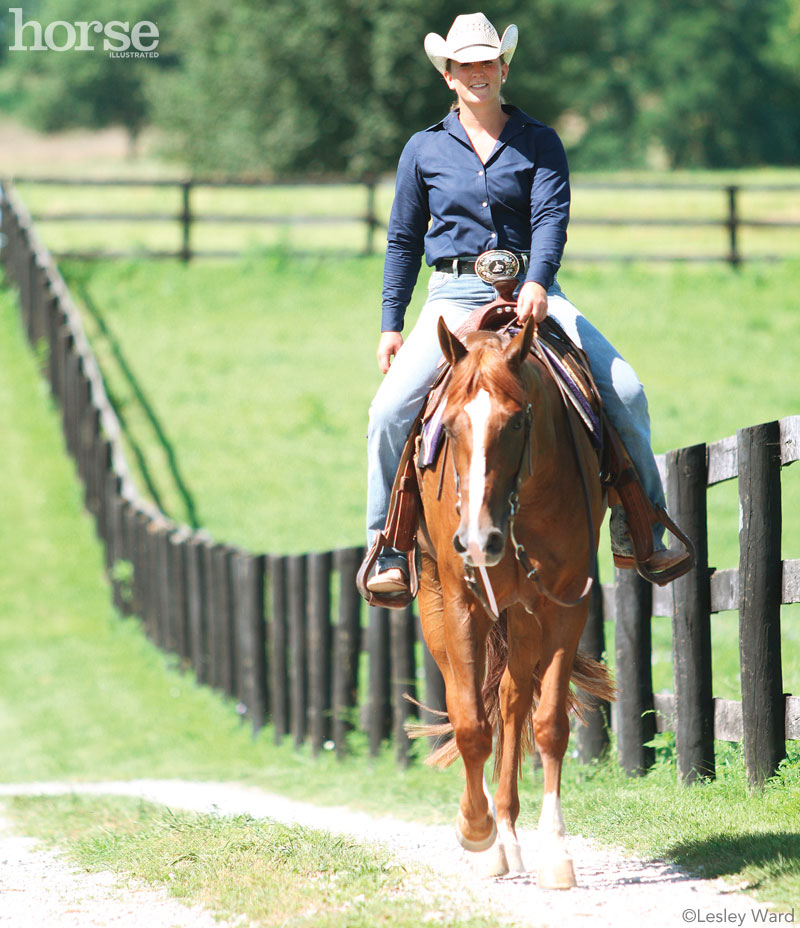 “What works for one horse may not work for another horse,” says Lori Windows of Wyanet, Ill., who has logged 50,000 sanctioned race miles with the American Endurance Ride Conference (AERC) and Upper Midwest Endurance and Competitive Rides Association. She just won a second national championship this year, and has competed in the World Equestrian Games. “I’ll be 65 years old this year,” says Windows. “And I’m still hard to beat.

“All my horses have to be treated differently,” she says.

He says that when it comes to curing trail problems, nothing beats practice. “A lot of miles will cure a lot of these problems.”

“It requires time and repetition,” agrees Carrie Scrima of Austin, Texas, founder of the American Competitive Trail Horse Association (ACTHA). “Don’t think you can ride once and then wait three weeks till your next trail ride. You need to work on these things frequently.”

A horse wanting to be home is natural, but there are things you can do to help correct one that doesn’t want to leave the barn or hurries home.

“I always make sure that I slow my pace down as I head home,” says Wolgram. Letting your horse trot or canter toward home only exacerbates his natural tendencies.

“When you start heading toward home, you can go past the barn and do another short loop,” he adds.

Wolgram says trailering the horse to another location can also help break things up when you have the time.

Stay calm and don’t be overpowering.

“The main thing is a calm and confident rider reaction,” says Windows.

Ride with a role-model horse.

“I try to make it an enjoyable experience for them to go out,” says Scrima. “They go out with a friend, and then their confidence is built up. In fact, it’s one of the best ways to teach any horse to do any obstacle—let him follow another horse. That’s how foals learn—they follow their mothers.”

Put the horse to work.

One technique Windows has success with is backing the horse when he doesn’t want to leave the barn. Once she’s backed a ways, Windows says the horse would usually prefer walking in the correct direction rather than backing.

Similar to the backing theory, Scrima finds putting the horse to work helps redirect barn sour behavior. “If he thinks he’s going to turn around and go back to the barn, then the moment he turns around, we start trotting circles. When he goes away from the barn correctly, he gets to rest, and he gets relief.”

If the horse tries to hurry home, Scrima also puts him to work. “He’ll find himself doing figure 8s, circles, turning around and going the other way whenever he rushes. I allow them to keep their feet moving because the more you pull on the reins, the more frightened they become.” 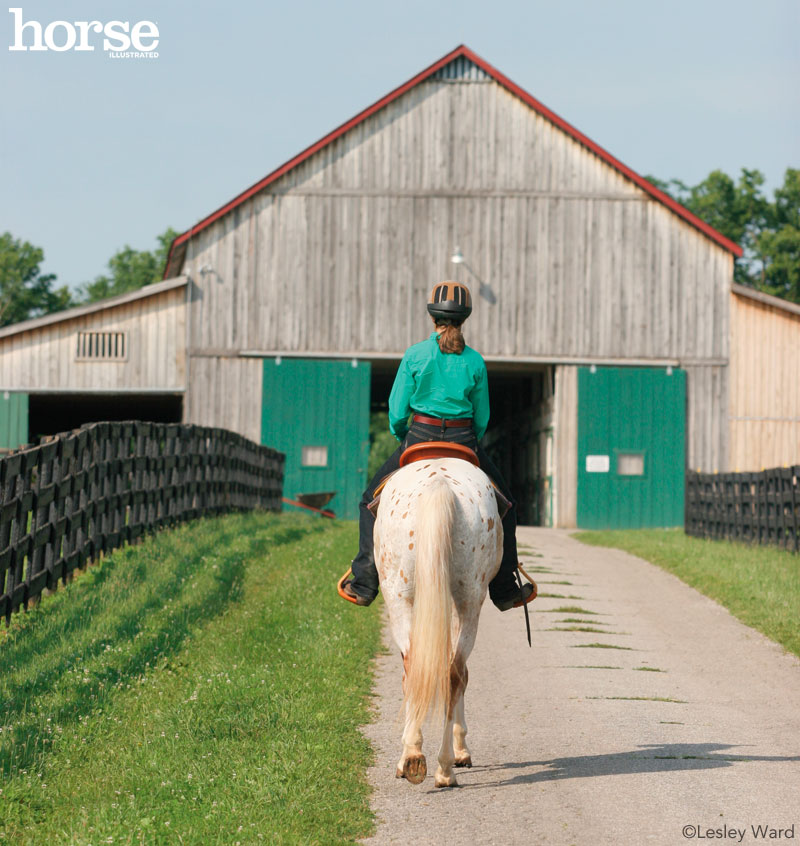 Horses are flight animals, so spooking is another behavior that comes naturally to them. But like barn-sour behavior, there are techniques to reduce spooking and to successfully react to a spook.

Windows uses the term “flooding” for desensitization work. “If you know your horse spooks at things flapping in the wind, flood him with it,” she suggests. “Ride constantly past a coat hanging in the wind that’s flapping, or have someone stand there and shake it. Once horses learn that that thing won’t cause them physical pain, it’s incredible what they’ll put up with. If you can find the things that make them spook, expose them to those things over and over again.”

Learn to ride out the spook.

“If you maintain a soft connection between your hips and your spinal column so that connection can move freely, then you’re in much better shape to move with your horse than if you’re rigid,” Scrima says. “Heels down grounds you.” During a spook, you can also sit back with your legs forward to help stabilize yourself like a cutting rider.

Help the horse through it.

Wolgram says it’s important for the rider to be confident so that the horse knows you will protect him and that you’re the leader.

Windows is a fan of trainer and veterinarian Robert Miller, and one technique he taught her is to acknowledge the thing your horse may find scary before he spooks at it. “Horses can read panic and frustration very well. Your job is to not panic, not react and not get frustrated. Turn and acknowledge that thing before the horse does, and then he knows you know it’s there and is less likely to act alarmed. I’ll say my horse’s name as I acknowledge it, and I’ll see him look at it. It’s as if he’s saying, ‘It must be OK because she knows it’s there.’”

Scrima says that if your horse is extremely spooky or hyperactive, you should also examine what you’re feeding him.

Perhaps nothing is more annoying on trail than a bouncing, nervous jig.

Wolgram says the first thing to do to prevent jigging is not to try and slow your horse’s walk. “I always promote a horse moving forward. I’ll let him walk as fast as he wants to walk. By doing that, you can usually keep him from jigging.”

Put your horse to work.

If he does break into a jig, Wolgram recommends circling. A tight circle will force him to walk. Each time he jigs, repeat the circle. “It takes a lot of work, but it’s usually effective,” he says.

In a similar strategy, Windows will turn her horse around when he jigs. “I stop her, I turn her around, and make her walk in the other direction about 50 feet. Then I turn her back in the direction she wants to go. If she jigs again, I repeat.”

Scrima recommends making lots of turns with a jigging horse. “Horses learn from reward and release, so the minute those feet stop jigging, I give them the rein. Often that occurs in the turn,” she says. Riding with older, calmer horses can also help. 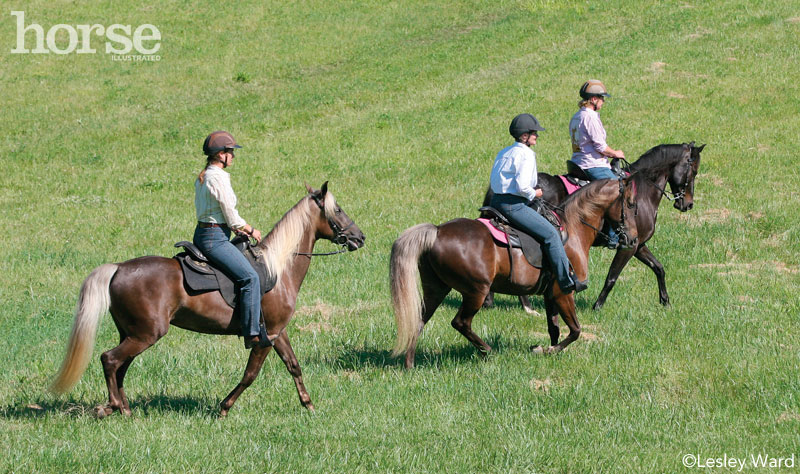 Some horses only want the lead position while others only want to follow. If you regularly ride in groups, you’ll want a horse that can accept either position.

“Say you’re trotting,” says Scrima. “The first person will ride to the count of 10, and then turn around and become the last horse. That way the horse gets to practice being in the lead, being at the end and being in the middle. It’s a confidence builder so that he can learn to accept being in any position.”

Help your horse be confident.

For horses that don’t want to lead, it’s often a matter of confidence. Windows rides alongside another horse, then has the other person drop back. “I give my horse leg and the command to keep going. A horse that doesn’t want to lead is not confident in himself, and he has to take his confidence from the rider.”

Keep at it, and with time you and your horse will be enjoying your time on the trail with no trouble.

MICAELA MYERS is the author of The Horse Illustrated Guide to Trail Riding (I-5 Press) and KNACK Leg and Hoof Care for Horses.

Why I Love Judging Trail Classes