Even though horses don’t speak our oral language, they’re communicating with us all the time. However, most of us overlook their whispers until they’re forced to “shout”—with kicking, spooking, biting or other unwanted behavior. Read on to find out the reasons for these horse behavior problems.

Here, with translation help from Colorado-based horse trainer, internationally known instructor and author Mark Rashid, let’s look at a few things horses do to communicate and what they might be trying to tell us—beyond the simple explanation of equine attitude. 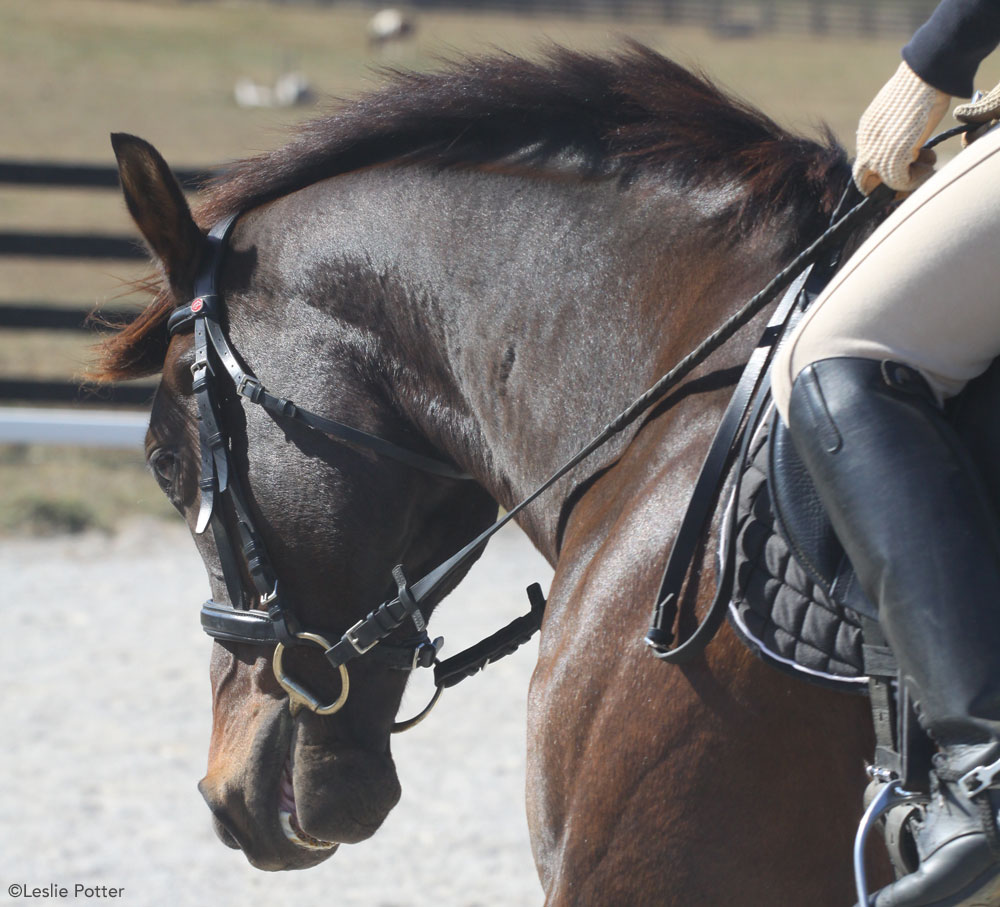 These horses express their displeasure with the saddling process by snaking their heads around, pinning their ears or exhibiting other signs of grumpiness.

“At a recent clinic, we had a horse who was very cinchy, would buck saddles off and so on. I was running my hand lightly along the sternum, and I felt a rib pop. This horse was having all this trouble with bucking because he was in so much pain. He could hardly stand to be cinched up.”

Horses that aren’t comfortable with the bit may chew excessively, open their mouth, root on the bit, try to pull the reins out of your hands or throw their heads.

“I have a young horse that was rooting on the bit. Right after that, she developed a sore back. I had three different people work on her and the back pain kept returning. Finally, an equine dentist found a tooth near the back of her mouth that was causing her a lot of problems. It turns out she was compensating through her whole body for the pain in her mouth.”

Troubles picking up a certain lead/troubles going downhill/difficulty standing for the farrier, etc.

Horses with these issues may not have been taught what you consider “correct” behavior. For example, don’t assume a horse has been trained to stand on three legs while being trimmed or shod. Horses may also be trying to tell you they have a physical problem.

Horses often can be off without being obviously lame. One way to check for subtle pain is to evaluate the stride. “Have someone stand the horse square in front of you,” explains Mark. “Notice the sacrum area and where the points of the hip are. This is his ‘neutral’ position. Next, have the person lead the horse away from you at a walk.” Ideally, each hip will rise and fall by the same amount. “If one hip rises or falls more than the other, then it’s likely the horse has pain in his lower back or his hip,” says Mark.

If a horse is really worried about something, he’s honestly afraid. “That’s where a wreck usually comes in—when we ignore the fact that our horse truly is worried and we force him to deal with it,” says Mark.

Some signs of worry:

“One of my young horses was afraid of traffic cones in the arena. So, instead of making a big issue out of the cones, we pretty much ignored them,” shares Mark. “In about 15 minutes, he was making the decision to make his way over to the cones.” His fear had been replaced by curiosity. “Before too long, I’d taught him how to push the cone over with his nose and kick it back upright with his hoof. And just a few minutes earlier, he’d been terrified by the cones.”

Words to the Wise

“When you’re dealing with what you think is a training or behavior issue, step back and look for everything except a training issue,” says Mark. “Look at poor saddle fit, dental problems, a bit that doesn’t fit that horse’s mouth conformation, shoeing and hoof balance problems, back or neck problems, and so on. More often than not, the ‘training issue’ turns out to be something else, and when the cause is found, the training issue goes away.”