The ideal western horse, according to trainer Patty Meek, is one that “gives to the bridle and is supple, giving both at the poll and to the left and right.” Beyond responding just to the rider’s hand, the horse must also be willing to move forward freely to just a light touch of the rider’s aids. Of course, few horses measure up to the ideal standard, but through consistency and practice of the basics, Meek teaches her horses to become responsive to light rein and leg cues so that they are predictable performers in the show ring. 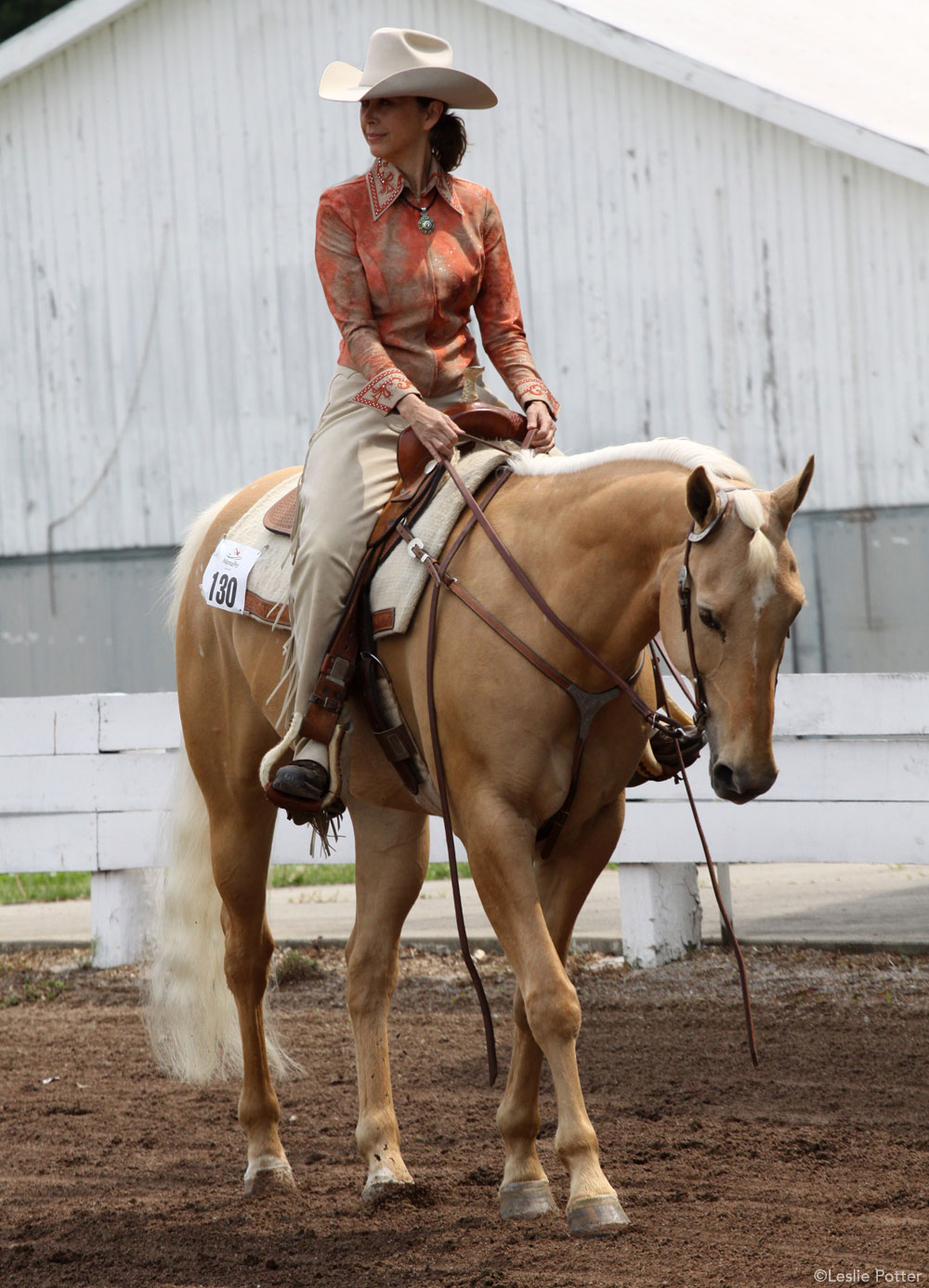 To achieve the goal of a supple, responsive horse, Meek uses several exercises to make her horses more attentive to leg and rein cues. From the beginning, she wants them to learn to respond to the lightest possible cue necessary to gain the desired response. To that end, all of her green horses are started in just a smooth snaffle and a western saddle, without spurs or other training aids. “I just stick with that basic equipment. But if I incur problems such as head tossing, I can add a running martingale to correct the problem,” she says. Spurs are never used in the first 60 days or so, but after four or five months, if she is really battling with a young horse to move off a light touch from the heel, she will go to a hunt-seat spur to get the horse to respond better to her leg. “And then I’ll take the spurs off once the horse learns to move off my leg,” she says.

The most common fault she finds in the amateurs’ horses that she trains is a failure to respond to the rider’s leg cues. In order for a horse to be supple in the bridle and attentive to steering, the horse must be coming forward with impulsion from its hindquarters. “Without forward motion, you can’t get suppleness out of the horse through the bridle,” says Meek. She expects a horse to move forward from just a light touch of the rider’s heel, as well as turn to a light touch on the rein. Her young horses all learn this in the beginning.

“I have a light touch, a medium touch and a heavy touch, whether it’s a touch of my heel against the horse’s ribs as a leg aid or a pull on the rein with my hand,” says Meek. “It’s very simple. For example, when I use the bridle, I pull with a light touch on the rein. If there’s no response, I go to a medium touch or pull. If there’s still no response, I’ll go to a heavy touch, and I’ll stay at heavy a couple of times, then I’ll go back to the light touch all over again and see if he responds.” The young horse is learning its job when he consistently responds to just light touches of the rider’s aids. The horse learns to respect the light touch; he knows if he doesn’t respond he’ll be disciplined with a more demanding aid.

One of the exercises Meek uses on young horses to introduce them to responding to the rider’s leg is the sidepass. This teaches the horse to be attentive to the rider’s leg cues. It also teaches a horse to move away laterally from the pressure of the rider’s leg against his ribs, laying the foundation for neck reining and smooth turns.

Meek begins by making her horse line up so that he faces a wall or the arena fence. “I just let him stare right into the fence. That way, when I leg-aid him to move over, he isn’t going to want to move forward. The fence acts as a block to forward movement, so I don’t have to be pulling on his mouth.” Meek believes that sidepass work should be done equally in both directions to avoid a one-sided horse. She likens the sidepass to opening a door (letting off pressure with one leg) and pushing the horse through the open door with the active leg against the horse’s ribs. “I want him to sidepass to the right, so I take my right leg off his side, giving him an open spot to go to,” says Meek. “And then with a leg aid on the left side, again always starting with the light touch, I push him several steps to the right as he moves away from the pressure of my left heel.”

Although in the beginning she allows a young horse to be a little crooked as he learns to sidepass, soon Meek asks her horse to maintain straightness from head to tail. Technically, the horse should always begin the sidepass by stepping across first with his hips. If he’s leading with his neck or shoulder, he isn’t straight, and needs correction. For example, when attempting a sidepass to the right, if the horse is bulging to the right with his right shoulder, she mentally thinks, “stay straight and move over.” She then picks up contact with her outside (left) rein to straighten the front half of the horse, getting the hindquarters back in a line with the front end.

Turn on the Haunches

Another rudimentary skill all western horses must learn is the turn on the haunches. In western horsemanship classes, individual pattern work often calls for a rider to demonstrate this maneuver. Moreover, a horse that is able to pivot effortlessly is a horse that is supple, obedient and responsive to the rider’s leg aids.

With a green horse, Meek introduces the turn on the haunches at the walk. She starts introducing the skill to her 2-year-olds in their third or fourth month of riding, although a horse of any age can be taught in the same manner. She focuses on maintaining a relaxed horse by keeping the drill simple. “They don’t have to do any reining pattern. They don’t have to worry about speed. It’s always form before speed.”

She starts by asking the horse in the arena to walk a circle, and continue walking that circle, making it smaller and smaller. “I use my outside leg as a push leg, and I push harder and harder,” she explains. Soon the horse shifts his weight back on his haunches, and she asks him to halt. “And then I keep pushing and pushing with that outside leg,” achieving a pivot. Then she lets the horse walk on again back into the larger circle in the same direction. “Don’t reverse into the other direction,” Meek warns. “You want to work on consistency, and make sure the horse understands what it is you’re asking of him in one direction before you switch and go the other way.”

As she’s using her outside leg aid to tell the horse to decrease the size of the circle, she sticks with her philosophy of first using a light touch of her leg, then a medium “bump” if necessary, only resorting to a kick of her heel when warranted. Again, the horse must learn to respect and respond to the lightest to touch of her aids. She judges her progress by how light the horse becomes on his side, and how much of a pivot the horse is able to complete without becoming frustrated.

A horse that is resistant and doesn’t understand the drill yet can show frustration in a couple of ways. “It could show up as a head toss, or the tail wringing or the horse’s ears going back. Their whole attitude changes,” she says. In these cases, Meek suggests going back and repeating the circle. “Then I just try to get a quarter of a turn on the haunches. The next time, maybe I’ll be able to get half. I let him walk, try the circle again, circle and circle, then stop and start the turn on the haunches. Think to yourself,” suggests Meek, “‘How much did I get that time?’ As you see the improvement, it will show you that you are on the correct path.”

If a rider is still having trouble, Meek suggests checking the leg aids. If the inside leg is not giving the horse an “open door” to pivot through because the rider is pushing with both legs, the horse has nowhere to go. Also, the horse simply may not be supple enough on the circle. 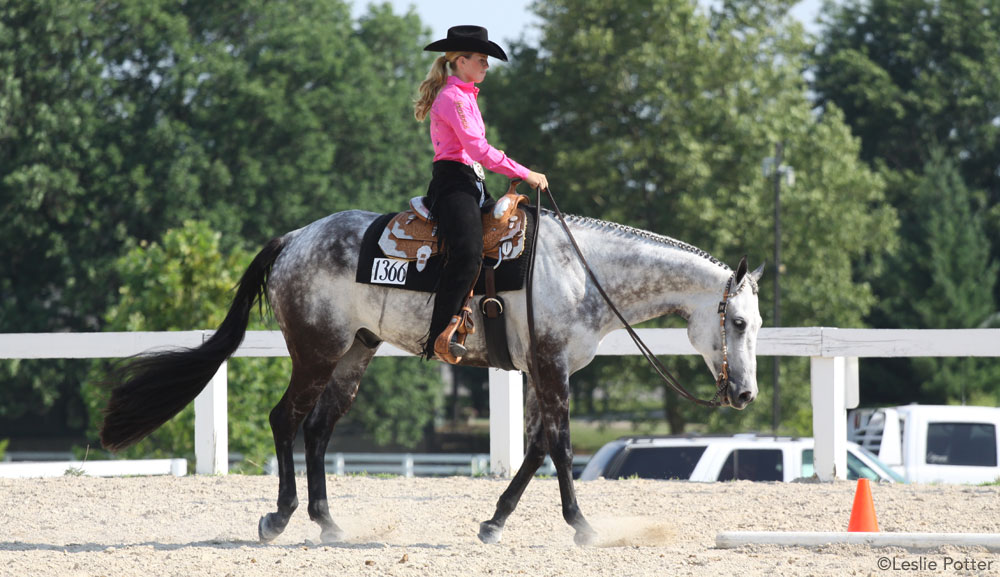 One of Meek’s favorite exercises for both green horses and amateur riders is to practice control and suppleness while working in a circle. She asks her riders to pretend that there is a perfect circle drawn in the arena, as if it had been laid out in white chalk or flour. She finds that some of her amateurs, especially those new to her methods, are not thrilled about spending lesson time working on perfecting a circle. “I have to explain to them that returning to the basics once in a while does not mean that they’re starting over. Rather, it’s focusing again on consistency and getting the horse to respond willingly to a light cue from the rider,” Meek says.

Meek likes to have her students pretend that they are walking a tightrope. If the horse and rider team stray off the circle to the left, it could be because the horse is falling in on his shoulder, and the rider needs to pick up that rein lightly, balance the horse and continue. The horse’s nose and his hips need to stay on this imaginary line. This attention to detail keeps the rider focused. “It stops drifting and daydreaming,” she says. “I think when a horse drifts and kind of ‘does his own thing’ then the rider becomes a daydreamer and begins to think, ‘you know, this isn’t really fun anymore.’ But if I can get the rider to think that they’re in this sort of balancing act, then their concentration is better,” and, Meek says, the rider gains a sense of accomplishment by being able to keep the horse slightly bent on that circle and at a regulated pace.

Also on this “tightrope” circle, Meek has her riders practice their transitions. “We’ll work on walk-jog, all the while focusing not only on keeping the horse bent correctly on the circle and supple, but also carrying himself in the proper frame.” Later, horse and rider will work on transitions into the lope. Each time the horse is expected to respond to the lightest touch from the rider’s leg. Consistency at home produces consistency in competition.

“What you need is a horse that responds to you every time you show him, regardless of what mood the horse may be in. Frequently practicing the basics and keeping the horse attentive to light touches of the rider’s aids, makes for a predictable performance. You will end up with a horse that scores consistently not just because he’s having a good day, but because you have trained him to perform at this level.”