As the days get longer and the weather warms up, our thoughts start to turn to the myriad activities we hope to enjoy with our horses this year. To make the most of the seasons, enterprising horse owners endeavor to fill free time with events such as horse shows, lessons, clinics, trail rides and camping trips.

Our plans may seem innocuous as we imagine them now, but how they actually play out in reality may be an entirely different matter. Looming just beyond our daydreams is a stark necessity that is often a formidable obstacle to the enjoyment of equestrian activities away from home. Somehow we have to load our horses into a trailer and transport them without incident to the event site. If we contemplate the conflict between the horse’s basic nature and what is expected of him for trailering, it’s no surprise that problems frequently occur. 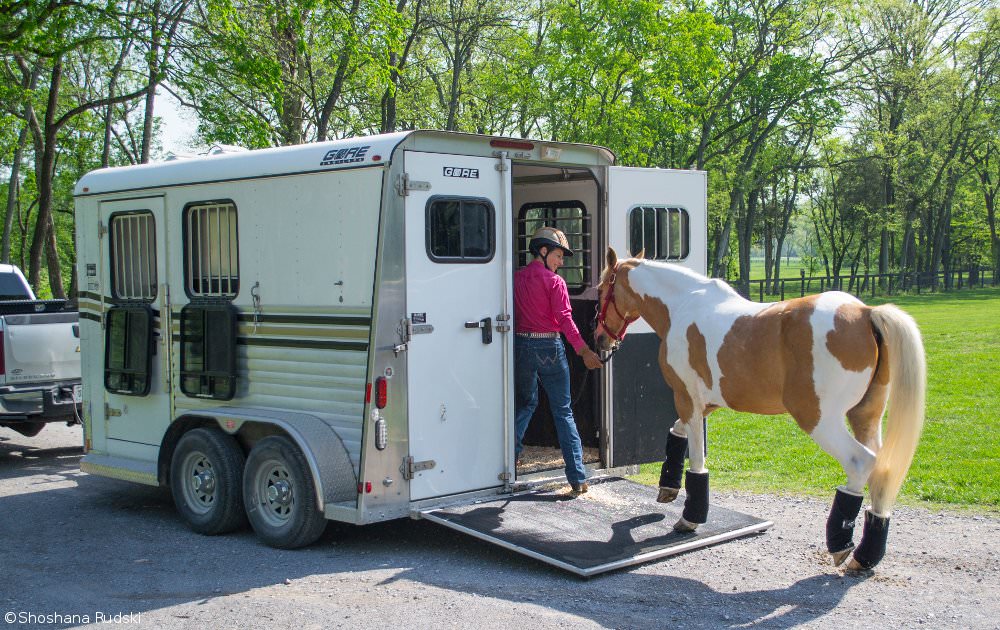 A few years back, an acquaintance at my barn and I made plans to haul our two young horses to a local peninsula to enjoy a day’s outing on picturesque seaside bridle paths. My mare had some experience loading and hauling to local shows, and Darla’s horse Shadow had recently been trained to load into her trainer’s two-horse trailer.

We carefully wrapped Shadow’s legs, attached a rubber head protector to her halter crownpiece and gently asked her to move forward into the trailer. She stepped in with confidence and began eating hay while we attached the trailer tie to her halter. Just to be on the safe side, Darla and I decided to take Shadow on a short ride around the stable grounds before loading my mare into the other stall and setting off on our journey. Everything seemed to be proceeding without any trouble as we started rolling. We had gone about halfway around a row of pipe corrals when we heard a restless clattering from behind us, quickly followed by an abrupt lurching motion.

Darla walked back to see what happened and discovered her mare had panicked and jumped into the feed manger with her front legs, causing her head to be pulled into a dangerously unnatural position by the trailer tie.

We urgently set about trying to free the horse. Darla opened the back doors of the trailers while I entered the front through an emergency escape door and cut the tie strap. Shadow’s head immediately slammed into the roof of the trailer with enough force to split the rubber head protector. She then managed to force her head out of the trailer’s narrow emergency door as she struggled to free herself from the tight space she was wedged into.

With the assistance of a few other boarders, we forced Shadow’s head back into the trailer and secured the emergency escape door. The boarders went in search of strong ropes with which to “pull” Shadow out of the manger while Darla ran to call the vet. In the interim, Shadow continued to thrash and flail, and in the course of her struggles managed to extricate herself from the manger and roll out of the trailer.

Fortunately, Shadow’s injuries had missed her vital areas and she escaped from the ordeal with only 22 stitches above her right eye. For Darla and me, the experience served as a frightening lesson about how quickly everything can go completely wrong during even a well-planned horse-trailering experience. While Shadow (who has since recovered from the incident) had been taught to load into a trailer, she had never been in a moving trailer before.

To minimize the possibility of potentially disastrous trailering problems such as the one just described, it makes sense to try to understand the trailering experience from the horse’s point of view.

The types of problems people tend to have while trailering horses can be broken down into two general categories: loading or unloading problems and hauling problems. At the root of most loading problems is one common explanation, which is simply that horses are born with a natural wariness of confinement. This isn’t hard to understand when we consider that horses have evolved as prey animals whose primary defense mechanism is to flee from danger. The horses that manage to survive in the wild are those that avoid any situation where they might find themselves trapped without and escape route.

In this respect, our domestic horses aren’t very different from their feral cousins. Although selective breeding has had positive effects on temperament and tractability, most horses still have the potentially adaptive genetic “hard-wiring” of their prey species.

Bearing this in mind, let’s try to consider the interior of a typical two-horse trailer from a horse’s viewpoint. The horse is being asked to move from the relative safety of open space into a dead-end space that isn’t much bigger than his body—a space where he stands alone and vulnerable, removed from the comfort and safety that comes from being around other horses. To the horse, a trailer is a dark, enclosed space to which his vision and other senses must adjust, and a potential trap from which no escape route is evident. If you were a horse, would you willingly walk into a place like this?

Recognizing the underlying behavior in most loading problems as fear of confinement gives us the understanding we need to solve them. We must work to alleviate our horse’s fear of trailer confinement or resign ourselves to lifelong battles at loading time. The most important part of this training is to do it well in advance of the actual event, on days when you literally have all day to spend on it. This cannot be rushed, because the horse must set the pace of these lessons. If the horse is pushed, he will not have the chance to relax enough to realize there’s nothing to fear about trailers.

There are many good books and videotapes on trailer-loading training. Two that I have found particularly informative are the video Trailer Loading & Hauling Tips by Jimmy Williams, and the section on successful trailer loading in the book Lyons on Horses, by John Lyons. I have incorporated many of the elements of these training methods in my own training approach.

I like to begin by leading the horse at his shoulder toward the trailer. At whatever point the horse stops moving toward the trailer, I stop with him and leave a little slack in the lead line, waiting as long as necessary for him to relax. The signals that he is relaxing are when he drops his head back down to its normal below-withers position and also loses the rigidity in his posture. This is when I ask him to move forward again. If he balks, I begin lightly tapping his hindquarters with a rigid, 4-foot “pole”—a piece of ½-inch PVC tubing or the blunt end of a firm whip will do—and I steadily increase the intensity of the taps until I get at least a few steps of forward movement. If the horse stops again at this point, I stop with him and again wait for signs of relaxation before asking for any more forward progress, at which time the process repeats.

We continue this slow and steady cycle of relaxation, followed by asking for a little more forward movement right up to and eventually into the trailer, always allowing the horse the opportunity to relax before asking for more.

It often takes many patient hours to teach a horse to load calmly, but this approach gives the horse the chance to relax and realize there’s nothing to fear about trailers. Pulling him in against his will, on the other hand, reinforces the fear. Once the horse is in the trailer for the first time, I allow him to back out whenever he’s ready, and then ask him to load right back in again.

I repeat the loading in and out of the trailer several more times. At the lesson’s conclusion I feed the horse his evening ration in the trailer, further reinforcing the message that the trailer is a pleasant place where good things happen. This lesson is repeated daily until I am certain that the horse is relaxed and happily eating his meals inside the trailer. At this time I will take my calm pupil for a short, slow drive around the stable grounds and perhaps around the block. I gradually increase the length of the trips in the trailer during successive lessons.

On the day of the horse’s first actual event away from home, rather than risk undoing all of this work, I plan to load and haul a few hours earlier than I ordinarily would. This assures me that my approach will be patient and pleasant for the horse. Finally, if the horse’s behavior indicates that previous lessons may need repeating, it’s usually worth it in the long run to skip the planned event and spend more time reinforcing those earlier lessons correctly.

In contrast to the innate anxiety which is at the root of most loading problems, the vast majority of hauling problems are learned behaviors resulting from aversive prior hauling experiences. While it’s true that some horses react to any trailer movement by panicking, as Shadow had, we should recognize that many hauling problems are preventable.

A horse that has had one or two frightening trips being jostled about in a speeding trailer may develop behavior problems such as climbing divider walls (especially on turns as he loses his balance), kicking the rear panels and jumping into the feed manger. Sometimes the anxiety carries over into loading problems as the horse associates being loaded into the trailer with the trip to come.

If your horse behaves dangerously during handling, it is advisable to discuss the problem with your veterinarian, as the horse may require tranquilization to reduce the risk of injury during retraining.

Many conscientious owners don’t realize how rough the ride in a horse trailer is for their horses. I encourage every horse owner to take a short ride around his or her property while standing in the horse trailer (don’t do this on public streets, as it is illegal in some states). When I tried this, I was very surprised to find out how noisy, bumpy and awkward it was riding in the trailer in contrast to the comfortable ride I’d always enjoyed in the towing vehicle. This experience helped me to understand how horses can develop hauling behavior problems resulting from driving that seems quite reasonable to us.

To help prevent dangerous hauling behaviors from showing up in your horse, imagine that your horse trailer is a great, brimming tub of water that you’re pulling around behind you. Try to make all your stops and turns so smooth that not a single drop of water spills out. If you endeavor to haul your horses with this degree of gentleness, your efforts will most likely be rewarded with problem-free trailering.

Read more about safe trailering.
Get some tips on safely unloading your horse.
Before you hit the road, consult our trailering checklist. 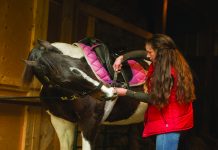 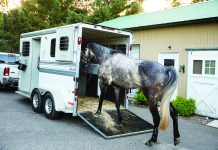 What You Need to Know Before Hauling a Horse