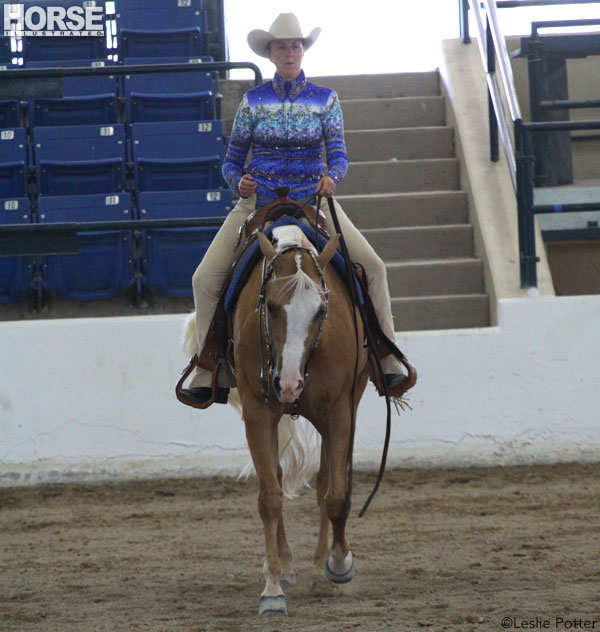 We’ve all heard it, maybe even said it ourselves: “If I could afford a $20,000 horse who moved like that I could win, too!” And to be perfectly honest, perhaps that’s even partly true for some events, where championship status relies at least partially on the horse’s exceptional way of going and conformation, while the rider’s skill and dedication are secondary to the quality of horseflesh beneath.


Not so for western horsemanship. “Western horsemanship judges the rider as opposed to the horse,” says Holly Hover, an AQHA judge, competitor, clinician, and Phoenix-based youth and amateur all-around trainer. “The event benefits people who don’t have the opportunity to purchase the really fancy, expensive horses. It’s an event where people can practice and gain momentum through their own hard work and be awarded for efforts in the arena. It’s the rider’s skill that earns a placing in the arena.”

Western horsemanship judges on the correctness of the rider’s seat, hands and feet, the finesse in riding, and the strength of his or her lines and angles as the competitor rides a series of maneuvers in a 30- to 60-second pattern devised by the judge and posted the day of the event.


The pattern may include a variety of different maneuvers, many of which mimic elements of western pleasure, reining, western riding and trail classes, says Holly. For example, “Straight lines — meaning walk trot, jog and lope on a straight line — and a lot of circles, arcs and turnarounds. There’s always a stop and a back. Judges can ask for circles, spins, quarter-turns, half-turns, turn-and-a-half, any combination of turning on the haunches or forehand and sidepassing. Extending the gut to a hand gallop or extending the trot is very popular now. You’ll commonly see straight-line patterns where the exhibitor is asked to maneuver up and down the arena in a straight line, adding different, difficult maneuvers.”

The difficulty of the pattern varies according to the class. For novices, the patterns are simpler and may consist of some variety of walking to a marker, jogging a circle and loping a straight line to the end of the arena. For upper-level classes, the patterns are much quicker and tougher, says Holly. “Maybe four or five quick maneuvers, such as jog to a marker, spin to the right, extend the trot, rollback left, lope an arc around to the next marker. Quick patterns in and out utilizing a challenging variety of maneuvers (are what’s usually expected).”

Scoring for the pattern in AQHA western horsemanship classes ranges from 0 to 20, with 20 being a perfect score. The judge scores on each element, plus the overall impression. In evaluating the quality of a rider’s performance in the pattern, judges look for smoothness of transition, flow and finesse. Mistakes, such as missed transitions, wrong leads, et cetera, subtract from the rider’s score.

“Normally for a novice rider, a middle-of-the-road score like a 14 or 15 will win the class — a fault-free, no-mistakes pattern,” says Holly. “But when you get to the world-class level, an average no-mistakes pattern won’t win. You’ve got to be fancy. You must step up and attack the pattern.”

Although beginning riders can compete in novice classes, before entering a competition, riders and horses should have a good working knowledge of basic horsemanship. Says Holly, “They should understand leads, the arc the horse can perform, how to make a horse go on a straight line, and upward and downward transitions. The horse and rider should be able to perform at home all the maneuvers that may be asked for at the show.”

In choosing a horse on which to compete, Holly recommends one who is calm and forgiving. “We’ve seen trouble with horses who are easily agitated, nervous and maybe anticipatory of any kind of training,” she says. Movement and way of going, while not as important as in, say a western pleasure class, can still influence a ride somewhat: “The horse needs to be a soft mover,” says Holly. “A rough horse tends to make the rider look weak. We try to get horses who are extremely good lopers, although we can give a little on the quality of the jog. It is much easier through training to enhance the jog but rarely can you improve a poor loper.”

As for conformation, Holly says larger horses tend to have difficulty with a lot of the western maneuvers, such as spins and lead changes, while smaller horses can’t always impart the look necessary to make a rider appear taller and bolder. Holly prefers horses between 15.2 and 16.1 hands for her training program, although not necessarily from a judge’s point of view.

Age range for competitive horses is wide. “At the world level, you’ll see horses between the ages of 4 and 15,” says Holly. “But some horses for the little kids are in their 20s and are still good horses.”

Holly’s training philosophy emphasizes teamwork between horse and rider. “It’s important that the rider and horse are prepared as a team and not individually,” she says. “There seems to be better timing when a rider and horse have prepared together a lot, as opposed to the trainer getting on the horse, fixing him and then the rider following the trainer. In addition, the rider who understands and knows the horse, who can prevent or cover up mistakes the horse makes is probably the rider who’s going to win as opposed to a rider who comes in and gets on a trainer’s horse and goes to show.”

This teamwork is created through lots of exercises and drills: Many of Holly’s students ride at least five times a week. “We work on exercises to strengthen the rider,” says Holly. “Different calisthenics and balance exercises, such as riding their horses without stirrups and standing in their stirrups. This enhances the strength of a correct seat and feet.” The team also practices the parts of the various maneuvers, including spinning, lead changes, riding with and without contact in the bridle, and so forth.

Holly also teaches her students to think and react swiftly — something that is especially crucial when the unexpected happens in the showring. “I do drills with them where I send them down the center of the arena and then call out different maneuvers. I might ask them to jog a straight line, counter-canter, circle to the right, change leads, continue a straight line, stop, rollback left, extend the jog, circle right. Having them move their horses in and out of maneuvers that they aren’t even aware are going to happen creates very quick thinking in the pattern, and that’s important.”

Once horse and rider understand and are successfully performing the maneuvers that will be asked for at their level, they’re ready to show. On show day, the judge posts the pattern he or she has devised a minimum of 1 hour before the class. “Normally all those maneuvers are ones that we’ve worked on at home, but in a different order,” says Holly. “As far as having a lot of prior knowledge of the exact pattern, we don’t. That’s what makes it fun!”

She copies the pattern down, then discusses and analyzes it with her students to identify its “pattern psychology.” Explains Holly, “A lot of times judges depict the pattern using heavy adjectives and adverbs; anytime a judge is specific about things, we try to read into the pattern what the judge is looking for. Also, almost every judge has one pet peeve or one maneuver that he or she is really wanting to see done well. So we go through the pattern with the exhibitors, trying to decide where the ‘meat’ of the pattern is, and really work on getting that portrayed to the judge.”

At the same time, Holly warns about putting so much emphasis on the meat of the pattern that the exhibitor gets sloppy with basic elements, such as the straight lines, or smooth transitions. “The judge marks on each element, so the rider really needs the whole package, not just the meat.”

When riding the pattern, riders should concentrate on the elements the horse is good at and not dwell on the parts of the pattern where the horse is weak. “The biggest mistake is when riders try to enhance a maneuver that they know their horse isn’t really good at,” Holly cautions. In trying to punch up a weak maneuver, many riders end up spurring the horse or getting anxious or angry. “The judge can really pick up on that. You end up having a rough maneuver or maybe an abusive look, and you’ll lose more points than you’ll ever gain.

“Instead, where you’re not so strong, just try to get by as best as possible. Remember that judges mark each maneuver, so try for a 0 score (an adequate, no-points-taken-off move) on the weak element, and spotlight your pattern where you’re good,” she says. For instance, if your horse is a beautiful mover but hasn’t quite mastered the 360-degree turn, in a pattern that would call for a spin, she suggests “the rider should ease through the turns and then show off the rest of the pattern. Be bold.”

Even though Holly suggests you don’t obsess about your weakness, keep in mind that one of the most important keys to putting together a winning pattern is striving for the whole package, rather than just certain parts. Maintain correct but relaxed feet, leg, arm and seat positions, and strive for a flowing ride, avoiding jerky movements from maneuver to maneuver. Greener riders should aim for nothing more than a good, clean safe pattern, says Holly, while advanced competitors need to be fancier in their maneuvers and step up and attack the pattern. “Never make a judge wait,” advises Holly. “Be up and ready when the judge calls for you to perform. This exudes confidence. Assess your pattern and ride boldly through the maneuvers you know you have mastered. At the end of the pattern, turn and acknowledge the judge with a nod and retire to the end of the arena as directed by the judge. A smile of confidence is a subliminal sign that you have succeeded.”

But perhaps the real key to winning is the attitude and resolve the rider develops at home. Holly is convinced that through hard work and practice, anyone who’s determined to can be a winner in western horsemanship. “It’s really important that people sit down at the beginning of the year and say, ‘This is what I want to do. How can I get there? How much will I need to spend? How hard do I need to work?’ I’ve never had one person who has had long-range goals and stuck to them not get done what they wanted to get done. And that’s what’s fun about this event: If you stick with it and work and knock it out, you’re going to find success.”