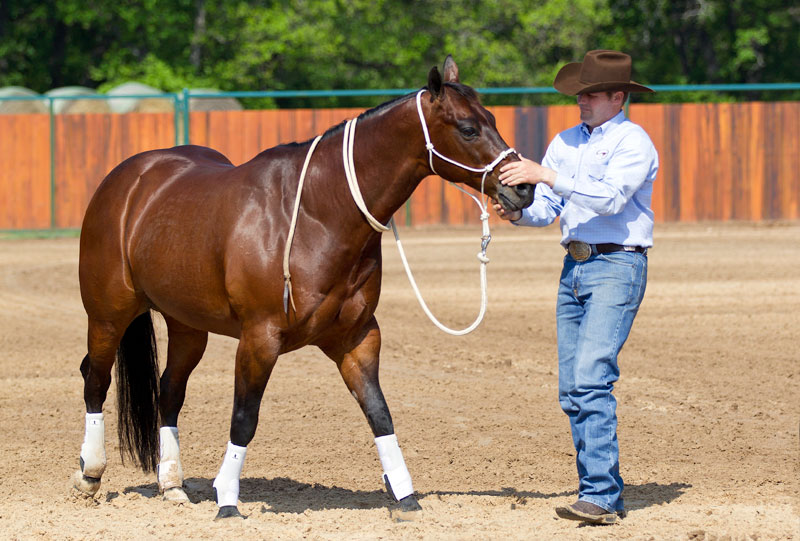 This exercise teaches your horse to lead forward and turn left and right in response to gentle pressure to his muzzle. A lot of horses are defensive about being touched around their muzzles and faces in general. Getting the horse to move his feet and yield to pressure from his muzzle is a test. Often, horses will yield to halter pressure, but when you ask them to give to pressure on their muzzle, they resist. Working on this exercise is a way to help teach your horse to be more respectful and responsive in general.

Step 1: Use the approach and retreat method to desensitize the horse’s muzzle to your hands. Rub his muzzle with both of your hands, and as soon as he relaxes, stop rubbing him. Then approach him again.

There’s no point in attempting this exercise if the horse won’t stand still and let you rub his muzzle with your hands. If he won’t accept your touch, there’s no way he’ll submit to pressure on his muzzle. Spend a few sessions on this step if you have to until the horse consistently remains standing still and relaxed when you rub all around his muzzle.

Step 2: Stand at a 45-degree angle to the horse’s shoulder, then drape the lead rope over your elbow or wrap it around the horse’s neck. This will keep it out of your way and will also make it accessible in case you need to use it. At the same time, it leaves both your hands free to work with the horse.

Place one hand under the horse’s jaw and the other hand over the bridge of his nose. Apply pressure by pulling his muzzle forward and across toward you. At the same time, walk backward away from him. By pulling the horse’s muzzle forward and across toward you, you’re pulling him off balance so that it’s easy for him to take a step forward. A lot of horses get resistant and lock up their feet. If you pull to the side, you’ll have more leverage to encourage the horse to take a step toward you. (Position your hand on the bony part of the horse’s nose, not the soft part, otherwise you’ll interfere with his breathing.)

SUCCESS TIP: If the horse is being really resistant and throwing his head up in the air, add a little extra pressure with the halter to get his feet to move. Always ask the horse to lead forward with your hands, and then tell him with the halter.

Step 3: As soon as the horse takes a step in your direction, immediately release all the pressure and rub him with both hands on his muzzle. Rubbing his muzzle stops him from becoming defensive. If all you ever do is grab his muzzle and pull him around, he’ll get defensive around that area of his face.

Step 4: Once the horse consistently takes one step in your direction, ask him to take two. Gradually increase the number of steps you ask the horse to take toward you. And when he’s leading well going in one direction, teach him to lead going in the opposite direction. When you lead him in the other direction, go back to asking for just one step and then reward him. If you’re quick to reward the horse, one step will turn into two steps and then three, and so on.

Step 5: Then, when the horse is leading forward well in both directions, start doing changes of direction by pulling his muzzle in the direction you want him to go. Start by doing a single change of direction, and then you can build up to doing serpentines all over the arena.

Try your best to keep your hands on the horse’s muzzle the whole time. However, when the horse is leading up to you, don’t continuously pull on his muzzle. Only pull when you want him to change directions or when he slows down. When you’re not asking him to turn or move forward faster, just keep your hands relaxed around his muzzle.