Are you too big for the horse you’re riding? Too small? At ringside you might hear comments about a child being “overmounted” on a large horse or an adult being “undermounted” when schooling a pony. What do these terms mean? They can refer to the relative difficulty of a horse to the rider’s ability. An inexperienced rider may be considered overmounted on a green or hot horse while an advanced rider could be considered undermounted on a push-button school horse. However, today we’re going to look at how these terms are used when considering the size of a horse and rider.

Generally, the ideal “leg length” requires that the rider’s stirrup lay (about) three-quarters of the way down between the horse’s topline and base of girth. If the stirrup lies much lower than this, the rider may appear too tall for the horse (undermounted); if the stirrup lies much higher, the rider may appear too small (overmounted). Somewhere between the two are several inches of “happy medium” where the overall picture of horse and rider is ideal. But this can’t be used as an ironclad rule, because there are additional considerations.

We’ve all been on the sidelines at a horse show watching as a tiny child comes into the ring mounted on a huge horse that is obviously far too big for them. While this certainly isn’t challenging for the mount, it can be difficult—or dangerous—for a rider to control a horse that is too large. Granted, in many cases the large horse being used is a calm veteran of many shows, but the size difference is still a concern. An overmounted rider may have difficulty giving leg aids, may struggle to achieve proper leg position, and may not possess the physical strength to control the mount in an emergency. A horse that is too large for the rider might also be more intimidating to ride. On top of that, the overall picture of an overmounted rider can be unbalanced. Unfortunately, it can be difficult to find an quiet mount in the ideal size for a small child rider, sometimes leaving people with no option but to use a larger horse.

Another sight you might see in the show ring is a small adult schooling a pony, or an older child who has just about outgrown her pony, or perhaps a large adult mounted on what seems to be a horse that is too small. When the rider’s legs begin to reach too far down, it can also create an unbalanced look, and some riders may find it challenging to ride a small mount. On the other hand, many adult riders purposely seek out smaller horses or ponies for the simple reason that “you aren’t so far off the ground.” This can work with the right horse; a shorter-yet-stockier horse will “take up” some of the rider’s leg due to a wide girth.

The weight of the rider is another factor. A common rule-of-thumb is that the weight of the rider (and tack) should try to be under or around 20 percent of the horse’s weight; so a 1000-pound horse should be able to handle around 200 pounds of rider and tack. But how strictly this “rule” should be followed varies greatly from case to case. Some horse and pony breeds are naturally more athletic or built to be able to handle additional weight more easily. Another key factor is the skill and ability of the rider. An advanced equestrian who is able to carry his- or herself properly makes the mount’s job easier and allows the horse to carry a heavier rider; likewise, a beginner rider who is bouncing all around and hasn’t yet perfected their riding posture will be more difficult for a horse to carry. You can observe this by watching a small-yet-top-level reining or cutting Quarter Horse at work with a capable rider. So the 20 percent rule is a useful guideline, but not necessarily a one that has to be followed strictly. 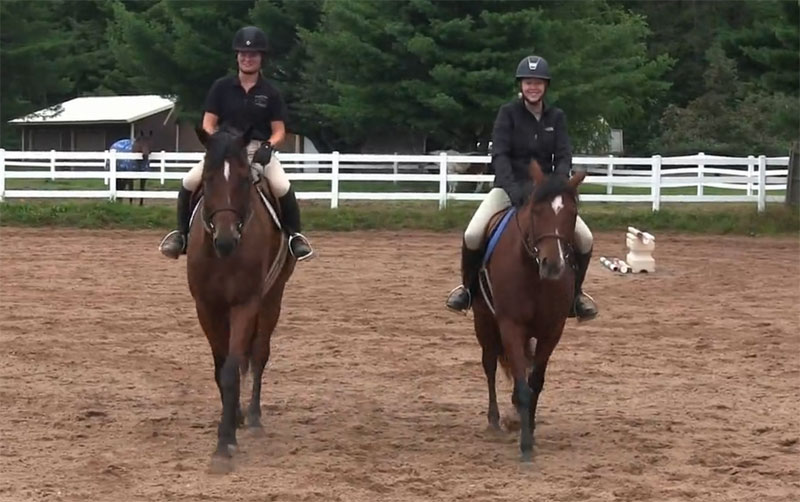 Suitability of Horse to Rider

You might see horse show classes that are judged on “performance, way of going, and suitability of mount to rider,” or something similar. It’s not always clear what is meant by “suitability” in this context, but here it likely also refers to the temperament of the horse in addition to the good match of horse and rider’s physical sizes. Suitability in this sense can mean that a beginning rider (in a beginner class) should be mounted on a calm, “been-there-done-that”-type horse, while in a higher-level class we should naturally expect the rider to be more advanced and the horse possibly more forward. A quiet pony that needs a lot of encouraging to get going might be very suitable for the walk-trot class, but might not be as suitable over fences, where a more forward pony would be preferred. The reverse is also true, of course.

Do you prefer a smaller horse, or do you seek out tall mounts?